Hawaii County Map, List of Counties in Hawaii with Seats

The U.S. state of Hawaii is divided into 5 Counties. Explore the Hawaii County Map, all Counties list along with their County Seats in alphabetical order and their population, areas and the date of formation. 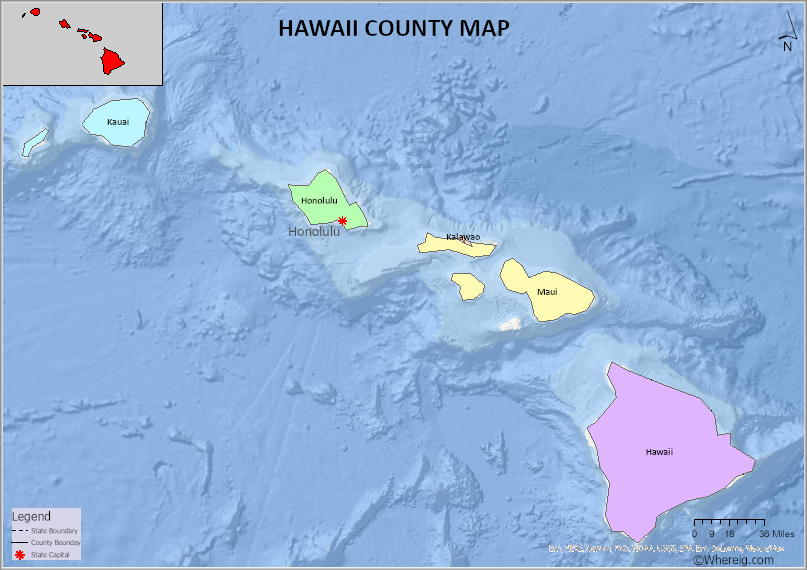 About Counties in Hawaii

Hawaii is one of the states of United States of America that is situated in the Pacific Ocean. Hawaii became a part of United Nations in the year 1959 as 50th state of the country. Hawaii is a group of islands which consists of 137 volcanic islets which covers 1,500 miles. It is indeed the fourth smallest state of Union. Hawaii is only the state completely made of islands. The state has the world’s largest island chain. Counties in Hawaii are 5 in number. They are Hawaii county, Maui County, Kalawao County, Honolulu County and Kauai County. Hawaii is the biggest county in the state of Hawaii by land area. The population of Hawaii in 2021 is expected to be 1.46 million. Among all these five counties, the most populous county is Honolulu County. The county that has less population is Kalawao County.

Hawaii is very famous for its wonderful and eye- catching beaches. Most of the beaches are covered with white sand. One may find it quite peculiar to see the beaches of Hawaii having different colours of sand like green, red, pink and black. The state has a nickname as it is called as ‘The Aloha State.’ And the word ‘Aloha’ means saying ‘Hello’ and ‘Goodbye’ in Hawaiian style. The capital city of state is Honolulu. Honolulu is indeed the biggest city of Hawaii. Oahu is an islet which is the most visited of all other Hawaiian islets. There is another tourist attraction in the state is Pearl Harbor.

The U.S. state of Hawaii has 5 Counties. This is list of Hawaii Counties and County Seats in alphabetical order along with check their population, areas and the date of formation.