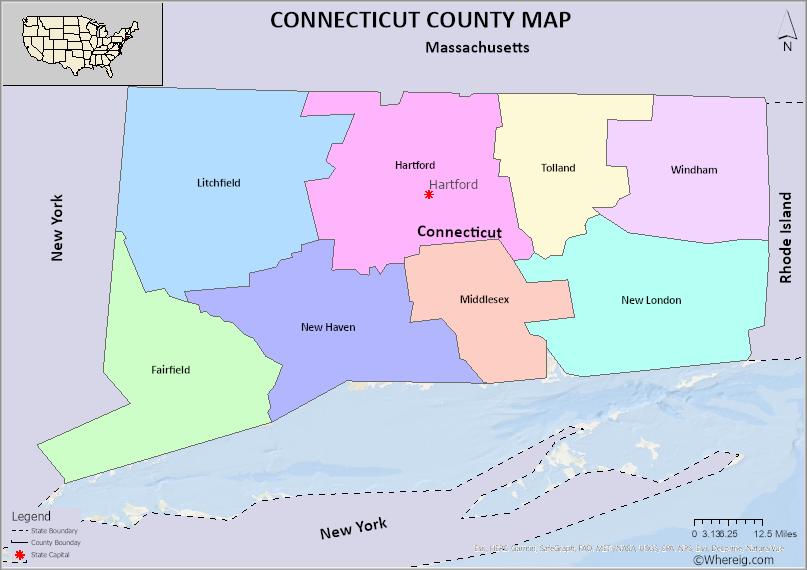 Connecticut is a state of United States of America which was one among 13 original states of U.S. This is also one of the six New England States. Connecticut is situated in the northeastern part of United States of America. Connecticut is known by its official nick name ‘Constitutional State’ The state shares the borders with Massachusetts to the north, Rhode Island to the east, Long Island Sound to the south and New York to the west. Connecticut has 4842 square meters area which is about 12542 square kilometers. The capital of Connecticut is Hartford. There are 8 counties in the state of Connecticut. Litchfield county is the biggest county in the aspect of possessing geographical area while Windham is the smallest one. The four major and important cities of the state are Bridgeport, New Haven, Stamford and Hartford. There 169 towns, 21 cities and 9 boroughs which fall under 8 counties. The best county to live in the state of Connecticut is Fairfield and it is the mostly populated county as well as. The least populated county is Windham.

Connecticut has a unique place in the world as it is the home for the first Colour Television, Phone book, Hamburger, Polaroid Camera, Nuclear- Powered submarine, and Helicopter. The credit of issuing the first traffic law about speed limit goes to Connecticut. The highest peak in the state of Connecticut is Bear Mountain which is in Salisbury in the northwest conner of state.

Like all other states of United States of America, Connecticut has also three branches of government. They are Executive branch, Legislative branch and Judicial branch. The state does not have county government. Counties of Connecticut are basically used for geographical and statical purpose. For ease of administration the state is branched as nine councils of government.

The U.S. state of Connecticut has 8 Counties. This is list of Connecticut Counties and County Seats in alphabetical order and check their population, areas and the date of formation.

Click on any county for its Map and Info
County Map of U.S. 50 States