Oregon County Map, List of Counties in Oregon with Seats

The U.S. state of Oregon is divided into 36 Counties. Explore the Oregon County Map, all Counties list along with their County Seats in alphabetical order and their population, areas and the date of formation. 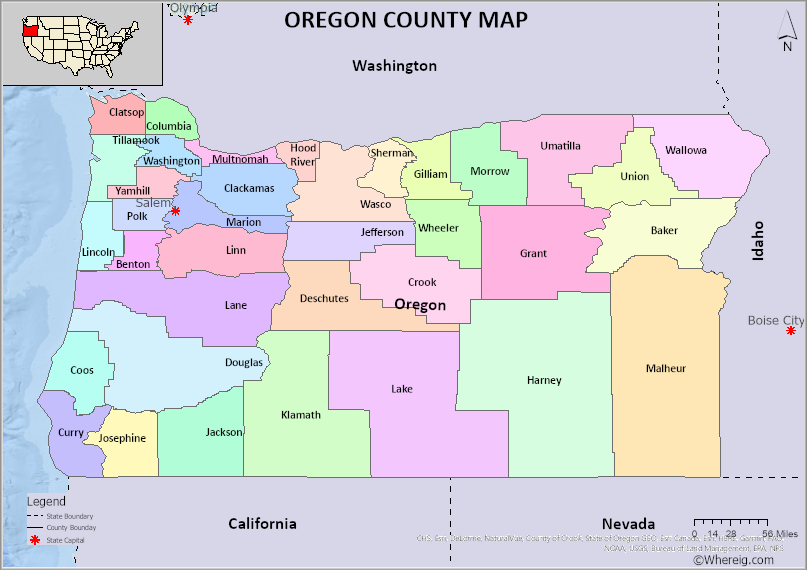 About Counties of Oregon

Oregon Counties are 36 in number. Among counties of Oregon, only 9 counties have the authority to change their county government. All the other counties to be specific 28 Oregon Counties are administered by a board of commissioners. This board of commissioners consists of three to five elected members. There are 242 incorporated cities in the state of Oregon which are governed by city councils that are considered as the highest authority within the city government. The city government provides a lot of services like streets and street maintenance, sewer and water management, building permissions, libraries, parks, protection for the people and many more.

The largest county by area in the state of Oregon is Harney which occupies 10,133.16 square miles in geographical space in the state. Malheur is the second biggest county in terms of its size. The tiniest county in Oregon is Multnomah County with 465 square miles. There is a speciality in Wheeler County as it is the oldest county among Oregon Counties; it is least populated county in the state. Multnomah County has the highest number of population in the state with 820,421 which is in fact most populous county in Oregon. In terms of highly populated counties after Multnomah are Washington County with 610,968 and Clackamas County with 423,729. Of Oregon Counties the richest county is Clackamas County as it has $31,785 per capita income. Washington and Multnomah stand second and third highest per capita earning counties with $ 30,522 and $28,883 respectively. Malheur County is the poorest County in the state of Oregon.

The U.S. state of Oregon has 36 Counties. This is list of Oregon Counties and County Seats in alphabetical order along with check their population, areas and the date of formation.

[an error occurred while processing this directive]
County Map of U.S. 50 States
Edited by: Vijay Kanth | Updated On: June 13, 2022