The U.S. state of North Dakota is divided into 53 Counties. Explore the North Dakota County Map, all Counties list along with their County Seats in alphabetical order and their population, areas and the date of formation. 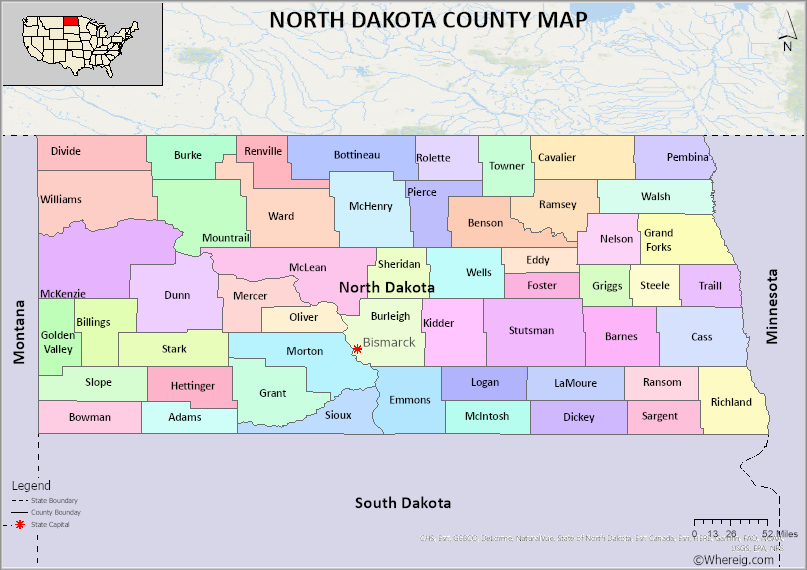 About Counties of North Dakota

North Dakota joined in the union as a 39th state and became one of the states of United States in the year 1889. It was Benjamin Harrison who was then President of the country gave the approval. U.S State of North Dakota is situated in the Midwest region of the country. The state shares the borders with South Dakota in south, Montana in west and Canadian regions of Saskatchewan and Manitoba in north and Minnesota in the east. North Dakota is in fact 19th biggest state in its size. The state ranks 4th least populous state in the country. North Dakota`s capital city is Bismarck which in Burleigh county. The state produces different types of wheat like spring wheat and durum wheat, peas, beans and honey. North Dakota is number one producer of honey.

According to the constitution of North Dakota the government is set up. The state has got three branches of the government. They are Legislative branch which makes the laws of the land, Executive branch that carries out the rules and regulations and judiciary branch which interprets the laws. Counties of North Dakota and citizens value the local government of the state. The local government comprised of 53 counties, 1314 towns and 357 cities, 759 special districts and 183 independent school districts.

The U.S. state of North Dakota has 53 Counties. This is list of North Dakota Counties and County Seats in alphabetical order along with check their population, areas and the date of formation.

List of Counties in North Dakota with County Seats