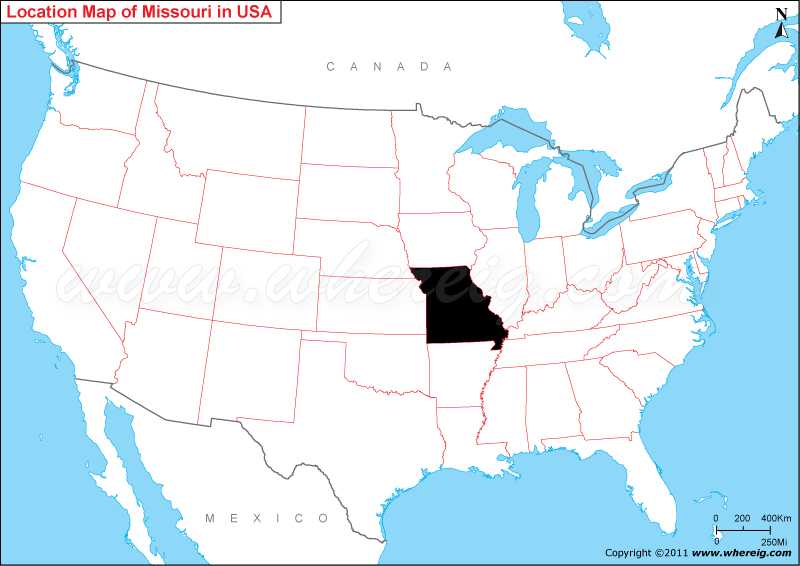 About Map: Map showing location of Missouri in the US Map.

Where is Missouri Located?

TMissouri is a state in the Midwestern region of the United States bordered by Arkansas, Illinois, Iowa, Kentucky, Kansas, Nebraska, Oklahoma and Tennessee. The latitude of Missouri 38.573936 , and the longitude is -92.603760.
Jefferson City is the capital of Missouri. In fact, Missouri was originally the part of France and it has been purchased from France and then defined as the Missouri Territory. However, after remaining as the Part of the Missouri Territory has admitted into the union as the 24th state on August 10, 1821.
Interestingly, it has both Midwestern and Southern cultural influences that reflects its history as a border state. Furthermore, it is also a transition between the Eastern and Western United States; St. Louis city is often called as "western-most Eastern city" and Kansas City as eastern-most Western city.
St. Louis city is located nearby the confluence of the Mississippi and Missouri rivers. In addition, the mean center of United States population is currently in Missouri. The climate type of Missouri is humid continental climate.
Some of the important cities of Missouri are St. Louis, Kansas City, Springfield, and Columbia.

Top 20 Cities of Missouri by Population