Ohio County Map, List of Counties in Ohio with Seats

The U.S. state of Ohio is divided into 88 counties. Explore the Ohio County Map, list of Counties in Ohio along with their County Seats in alphabetical order and check their population, areas and the date of formation. 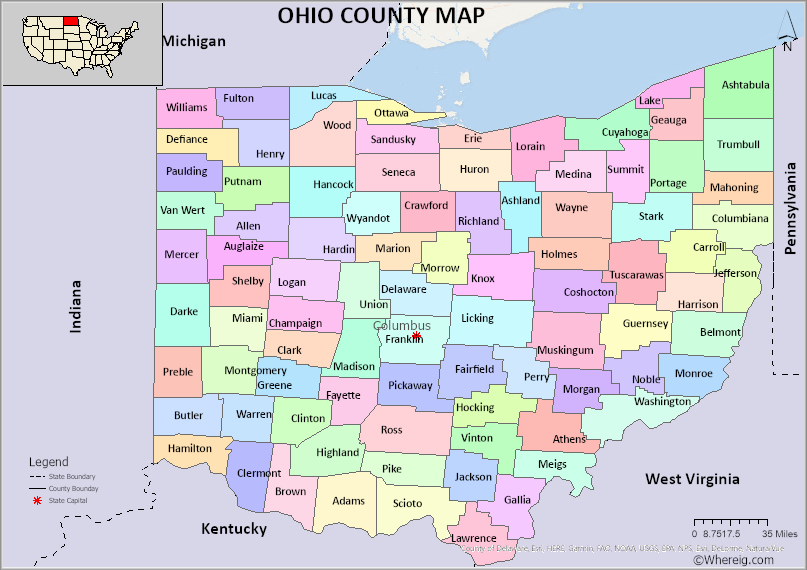 About Counties of Ohio

U.S State of Ohio is located in the Midwestern part of United States of America. The capital city of the state is Columbus. Columbus is the largest city in the state of Ohio. The state is the thirty fourth largest state by area. The state shares the borders with Lake Erie which is located to the north, Pennsylvania in the east, West Virginia to the southeast, Indiana to the west. The state is also known as “Buckeye State”. State has the total are of 40,860.69 square miles.

U.S state of Ohio has three branches of government namely Legislative branch, Executive branch and Judicial branch like all other states of the country. The local government of Ohio consists of 88 counties, Municipalities which include cities and villages. There are 251 cities towns and 681 villages and 904 special districts. According to the Constitution of Ohio and the rules and regulation of government Municipalities have in fact complete authority of home rule powers. Municipalities perhaps adopt various things like a charter, ordinances and resolutions for self- government. Each and every municipality can chose its own form of government. A lot of services are provided by city government for the citizens of Ohio. Most of Counties in Ohio are governed by Commissioners a sheriff, a coroner, an auditor, a treasurer, prosecutor, engineer a recorder and clerk of the court of the court of common.

The U.S. state of Ohio has 88 counties. Ohio is the 34th-largest state by area and with a population of nearly 11.7 million, is the seventh-most populous State. Ohio is located in the Midwestern region of the United States.

Ohio Cities by County and Population