Qatar officially the State of Qatar, is a country located in Western Asia and in the Middle East. Qatar is the richest country in the World. It's lies on the Persian Gulf in eastern Arabia, north of Saudi Arabia and the United Arab Emirates. 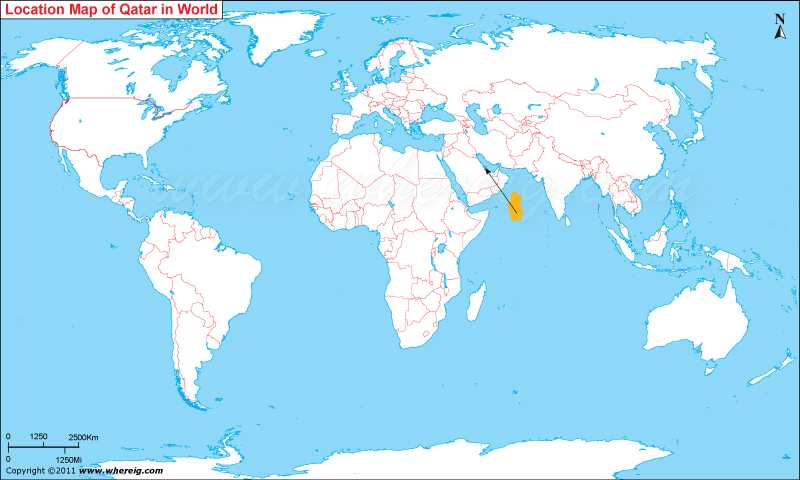 About Map: Map showing Where is Qatar located in the World Map.

Where is Qatar Located?

Qatar is a country located in the Western of Asia, Qatar Peninsula on the northeastern coast of the Arabian Peninsula. It covers 11,586 square kilometers of land, making it the 164th largest nation in terms of land area. Qatar map also shows that it is one of the smallest counties of the Middle East.

However, it shares its international boundary with Saudi Arabia in the south, rest of three sides; it is surrounded by the Persian Gulf. Furthermore, a strait of the Persian Gulf divides Qatar from its nearby island nation of Bahrain. The government type of Qatar is an emirate government. In addition, its legal system composed of Islamic (or Sharia) and civil law codes in a discretionary system of law. Furthermore, it is being controlled by the Emir.

What is the capital of Qatar?

Doha is the capital city of Qatar. It has a population of 644,799, Doha is located on the central-east portion of Qatar, bordered by the Persian Gulf on its coast. It's lies between latitue of 25.28 and longitude of 51.52.

How to Reach Qatar?

The football lovers can reach Qatar to witness the fantabulous and spectacular football matches, which are taking place in various cities of Qatar. The question that persists in the minds of FIFA World Cup diehard fans is ‘How to reach Qatar’. We have provided the information here on How to Reach Qatar. If you are flying to Qatar, you will arrive at the Hamad International Airport in Doha, the country's capital. From there you have plenty of public and private vehicles to take you to the FIFA World Cup Stadiums. You can take a bus from Saudi Arabia to Qatar. Within Qatar, there are fixed bus routes. Customs, on the other hand, can take up to four hours, especially during off-hours. Saudi Arabia is the only land route to Qatar. FIFA World Cup fans are requested to wear seat belts at all times, as security stops and checks may take place along the way.

The 2022 FIFA World Cup is scheduled to take place in Qatar from 21 November to 18 December 2022. Qatar will be the first Arab state to host the World Cup.

Qatar, a nation in the Middle East of the Asian continent, is situated on the Arabian Peninsula's northeastern coast. The country has a land border with Saudi Arabia, as well as sea borders with Bahrain, Iran, and the United Arab Emirates. With a total land size of 11,610 square kilometers, Qatar is a nation located on a peninsula in the Persian Gulf. The Qatar peninsula is roughly rectangular in shape and measures around 100 miles (160 km) from north to south and 50 miles (80 km) from east to west. Geographically, Kuwait and the United Arab Emirates (UAE) are near neighbors to Qatar. Salt flats and sloping desert plains make up Qatar interior. Its highest point is at the Qurayn Abu al-Bawl in the south. Qatar is among the world's driest nations, with only 81 millimeters of yearly rainfall on average. Except for a few acacia trees and coconut and date palms, there aren't many wild trees. But during the cooler months, when rain and dew gather in cracks and wadis (river beds), some areas of the interior plains briefly blossom.

The FIFA World Cup 2022 matches for each group were allocated to the following stadiums:

Places to Visit in Qatar

Qatar offers a unique experience to the visitors and travelers. If you want an adventurous vacation, head to Qatar where you can go skydiving over the Arabian Gulf, scuba dive in its seas, climb sand dunes, and explore historic forts. A desert safari excursion is one of the most popular outdoor activities in Qatar. There are so many places to visit in Qatar. Some of them are Msheireb Museums, National Museum Of Qatar, Katara Cultural Village, Radwani House, Film City, Museum Of Islamic Art, Al Zubarah Fort, Barzan Towers and so on. Qatar has an established social services system and a high standard of living as a result of its oil resources. One can enjoy and derive maximum pleasure by visiting the places in Qatar.

There are nine cities in Qatar. Doha is the largest city of Qatar and the capital of Qatar. Al Khor is a city in Qatar's northwestern region. It is the municipal capital of Al Khor and Al Thakira and one of Qatar's major oil and gas hubs. Al Khor is home to some of Qatar's most vibrant natural wonders, including the ancient Ain Hleetan Well and the Al Khor Towers, the Thakira Mangroves, Purple Island, Al Farkiah Beach, and, last but not least, the Al Khor Park and Zoo and the Al Bayt Stadium, which hosted the first FIFA World Cup Qatar 2022 match. Dukhan is an industrial city in western Qatar, Oil was discovered in the city and it quickly gained popularity. Madinat Al Shamal is another yet popular city situated in Qatar's northernmost region. Among the well-known cities in Qatar are Al Ruwais, Abu Dhalouf, and Mesaieed.

With a population of approximately 2.9 million, Qatar is the 141st most populous nation in the world. The majority of Qatar's population around 99.2% lives in cities and urban areas. Doha, the capital and largest city of Qatar, is home to more than 2.38 million people. This indicates that Doha is a place of residence to more than 82% of Qatar's total population. With around 88,000 residents, Al Wakrah ranks second in terms of population in Qatar. Mesaieed is Qatar's third-largest city, with a population of around 35,000 people.

Qatar has one of the largest economies in the world, consistently placing in the top ten richest nations according to data from the World Bank, the United Nations, and the International Monetary Fund Based on GDP per capita. Qatar's economy has grown drastically since 1949. Natural gas production and export, which began in 1949 after petroleum was initially discovered there in 1939, are the main sources of Qatar's economic prosperity. The cornerstones of Qatar's economy, petroleum and natural gas, which generate more than 70% of the country's total government revenue, more than 60% of its gross domestic product, and almost 85% of its export profits. Qatar is the second-largest exporter of natural gas and has the third-largest known natural gas reserve in the world.

The government has made an effort to develop the fishing and agricultural industries by providing interest-free loans, although food production still accounts for a very small portion of the country's GDP (GDP). Agriculture is severely constrained by the lack of fertile land and water, and a significant amount of the nation's food supply must be imported. However, the increased production of fruits and vegetables like tomatoes, squash, and eggplant that Qatar currently exports to neighboring Persian Gulf nations has been aided by the use of sewage water discharge and desalinated water for irrigation. By the conclusion of the 20th century, production of milk, cereal grains, and meat had also started to rise.

Qatar has made an effort to industrialize in order to diversify its economy. The manufacturing industry is largely made up of major companies with combined state and international private ownership. Additionally, it has been attempted to produce cement and flour. The Qatar Central Bank was established in 1993. It delivers banking services for the government and creates the Qatari rial, the country's unit of currency.

Distance from Doha to Other Qatar Cities