Home > Where is Bhutan 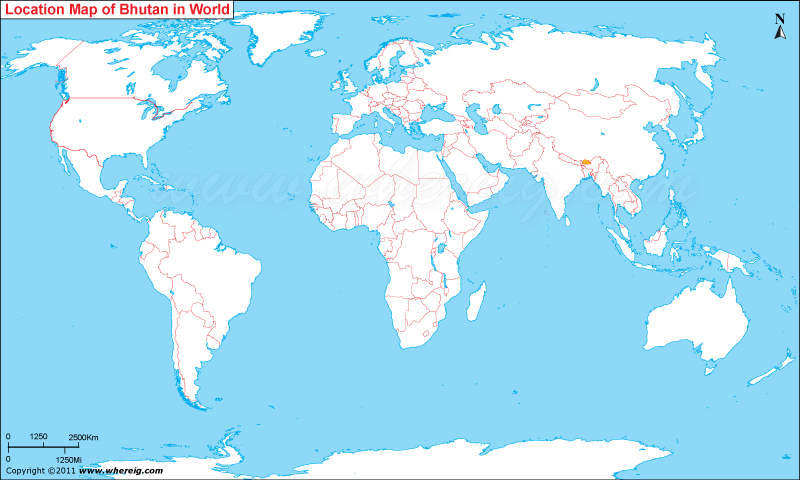 Where is Bhutan located on the world map?
The given location of Bhutan clearly depicts it that Bhutan is located in the south Asia. Bhutan map also shows that Bhutan is landlocked country located eastern side of Great Himalaya Mountains. Bhutan shares its international boundary with two giant countries i.e. from the northern side it is China and from southern side it is India. Just like a sandwich territory, Bhutan act as a buffer zone between two big countries.

Bhutan has quite astonishing natural landscapes ranging from subtropical plains in the south to the Sub-alpine Himalayan heights in the north along with some of the highest peaks which measured more than 7,000 meters.
The religion of the country is Vajrayana Buddhism; hence majority of people in Bhutan are Buddhist. However, Hinduism is the second-largest religion in the country. Thimphu is the largest and capital city of the country.

The government type of Bhutan has evolved from an absolute monarchy to a constitutional monarchy. The new developed democratic system consists of an upper and lower house; the lower house is based upon political party affiliations. Besides, Bhutan is a member of many important international organizations including the United Nations and the South Asian Association for Regional Cooperation (SAARC).
The climate type of Bhutan varies according to the altitude of the country; so, it ranges from subtropical in the south to temperate and polar-type climate in the highlands. On the northern side of the country, snow remains present round the year.
Moreover, the economy of small country Bhutan is depending upon agriculture, forestry, and tourism. Besides, Bhutan also sales hydroelectric power to India, it is also a good source of revenue for the country.