Doha is the capital and most populous city of Qatar. Doha is the designated venues for the FIFA World Cup 2022.

Location Map of Doha in Qatar 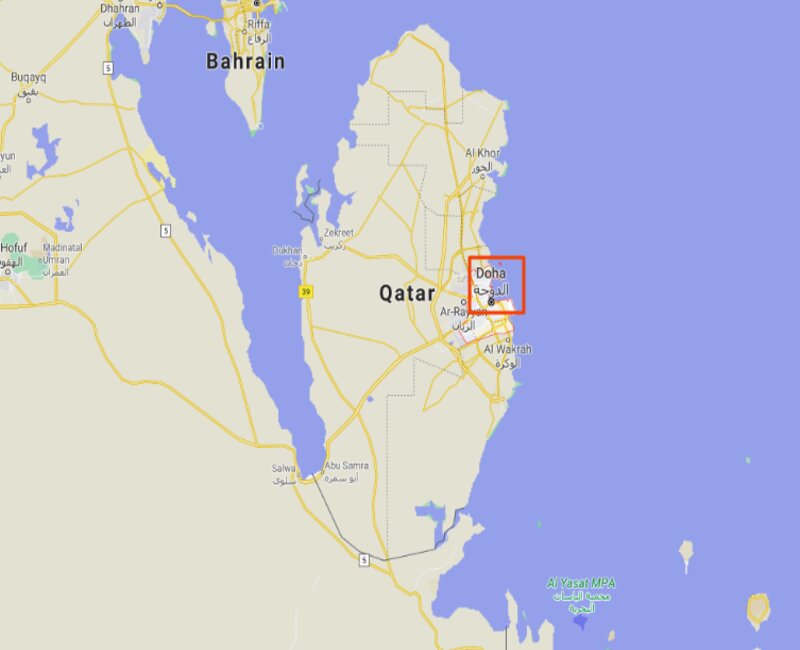 About Map: Map showing Where is Doha located in the Qatar Map.

Where is Doha Located?

Doha city is located on the east coast of the Qatar Peninsula in the Persian Gulf, South of Al Khor city and North of Al Wakrah city. Doha's latitude and longitude is 25.2854° N, 51.5310° E . Doha is the political and economic center of the country and also is one of the world's most important global cities, with an estimated population of 2,382,000 residents as of 2018, in an area of more than 132 square kilometres (51 square miles). Doha's economy is built primarily on the revenue the country has made from its oil and natural gas industries. Doha city is set to host the 2022 FIFA World Cup from 21 November to 18 December 2022.

Doha city is the capital of Qatar. Doha is situated on the Persian Gulf on the east coast of the Qatar Peninsula. Within the boundaries of the city, more than two-fifths of Qatar's population resides. Due to its modern architecture, it is referred to as Dubai's miniature. Doha is home to Hamad Medical City, which oversees medical assistance, and Education City, a location dedicated to research and education. It also comprises Doha Sports City, or Aspire Zone, a global sports hub that houses the Aspire Dome, Hamad Aquatic Centre, and Khalifa International Stadium, the stadium for the 2022 FIFA World Cup.

Doha is a highly developed city in the Quarter. 400 hectares of new land and 30 km of new shoreline have been created through land reclamation off the coast. Hamad International Airport was built on reclaimed land that covered half of the 22 km2 surface area. Doha's geology is mostly made up of weathered unconformity on top of the Eocene-era Dammam Formation, which has resulted in dolomitic limestone. Doha experiences lengthy, sweltering summers and brief, mild winters due to its hot, desert climate.

The financial hub of the Quarter is Doha. Several international and national organizations have their headquarters in this city, notably Qatar Energy and Qatar gas, the two biggest oil and gas firms in the nation. Doha's economy is based mostly on the revenue that the nation has earned from its natural gas and oil industry. In 2011, Doha was listed among Fortune's 15 finest new cities for business.

To conserve the Doha city's cultural and architectural legacy several programs have been implemented. The Qatar Museums Authority's "Al Turath al Hai" is one such initiative. To preserve the nation's cultural character, Sheikha Moza bint Nasser established Katara Cultural Village as a model village in Doha. The most famous sport in Doha is football. Six sports clubs in Doha have football teams competing in the Qatar Stars League, the country's top football league. Doha has hosted a number of football tournaments. The AFC Asian Cup in 1988 and 2011, as well as the FIFA World Youth Championship in 1995, are among the most prestigious tournaments.

Places to Visit in Doha