Where is Iraq Located

Home > Where is Iraq 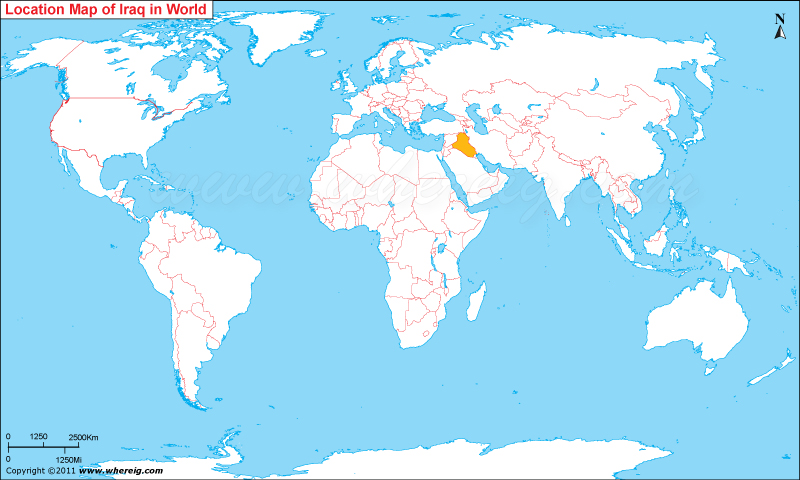 Where is Iraq located on the world map?
Iraq is quite known country that remains in news due to its rich petroleum reserve and war; however, the Iraq location map clearly shows the presence of Iraq on the world map. As shown on the map, Iraq is a western Asian country and part of the Middle East country as well. Iraq shares its international boundary with Jordan in the west, Syria in the northwest, Kuwait and Saudi Arabia in the south, Iran in the east, and Turkey in the north. In addition, it has also small part of coastline measuring about 58 kms along with Persian Gulf.
Interestingly, Iraq has had quite old civilization and it was more popularly known as Mesopotamia meaning Land between the rivers. Hence, right from 6th Millennium BC the continuous civilization has been taking place.

Very recently, the government system in Iraq changed and hence, currently the government type in Iraq is an Islamic, democratic, federal parliamentary republic. The federal government is consisting of the executive, legislative, and judicial branches, as well as numerous independent commissions.

As it clear from the map of Iraq that the country's large part is covered by desert, but by presence of two important rivers i.e. Euphrates and Tigris the respective areas of the country has fertile land where agriculture has been practiced. The north part of the country is largely possesses mountainous region. The climate of Iraq is of desert type; though the winter is cool and summer is dry and hot. And the northern mountains region also receives snowfall and cold winds during winter.