US Map, Map of The United States of America

The largest economy of the world with a GDP of $20.807 trillion, the United States of America is the third largest country by land area and population. USA comprises 50 states and a federal district. The capital city of the country is Washington D.C. Some of the major cities in the United States of America are New York City, Los Angeles, San Francisco, Chicago, Seattle, Washington D.C., Philadelphia, Houston, Miami, Las Vegas, Boston, and Atlanta. 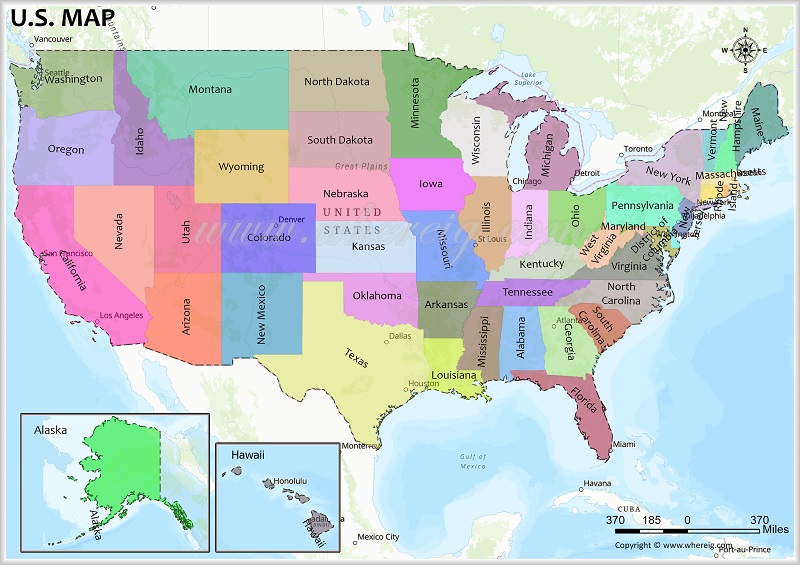 The United States of America map shows that the United States is located in the central part of North America Continent. US map also shows that it shares its international boundaries with Canada in the north and Mexico in the south. Besides, Pacific Ocean lies in the west, Atlantic Ocean lies in the east and Mexico Gulf in the south.
The Map of US shows that 48 states of the US are the part of mainland and rest two i.e. Alaska lies in the north-west of Canada which is separated by Bering Strait from Russian Federation and second one is Hawaii – it is a group of islands located in the mid-Pacific Ocean. The capital city of the US is Washington DC, however, the largest city is New York. Other highly advanced cities are Los Angeles, Chicago, Houston, Philadelphia, Phoenix, San Diego etc. The government type of the US is a constitutional republic and representative democracy featured with two party systems. Furthermore, the US government is regulated by a system of checks and balances administered by the US Constitution. US constitution is the supreme legal document of the country. Above all, the US is the world's oldest surviving federation.

Geography of United States of America

From its many miles of coastlines with their sandy beaches, the tropical Hawaiian Islands, to its mountain ranges like the Rockies and the Appalachians, the United States has a wide variety of terrains. Major rivers in the United States include the Mississippi River that traverses the country, and combined with the Missouri River, form a the fourth longest river system in the world.

Native Americans probably migrated to the region from Asia up to 40,000 years ago. These indigenous people of the Americas lived in tribes, and were typically nomadic throughout most of their history.European explorers arrived in the late 1400s, most famously Christopher Columbus, who reached the Caribbean islands in 1492. Juan Ponce de Leon followed shortly after that, arriving in what is now Florida,as the first known European to reach the main continent. The Spanish began to establish colonies in Florida and throughout the Southwest and Mexico, followed by the French, and finally the English. The Virginia Colony in Jamestown, settled in 1607, was the first permanent English colony in the New World. Once the Massachusetts Bay Colony was chartered in 1628, many English settlers flocked to the new world.

Settlers from the Netherlands set up the New Amsterdam colony in what would later become New York, but soon gave up their territory to England. France established colonies in what is now Canada and the Louisiana Territory, which makes up a large portion of modern-day United States. Thirteen British colonies were established along the Atlantic Coast by the early eighteenth century. Throughout this, the indigenous people were exposed to the diseases of Europe, which they had never built up immunities to, and were pushed out of their lands progressively farther westward over time.
The French and Indian War, part of the Seven Years' War that took place from 1756 to 1763, was a territorial battle between the British and French colonies in North America. The war resulted in Spain ceding the Florida territory to Britain, and France ceding its territory in Canada to Britain and the Louisiana region to Spain.
The British Crown, in an effort to regain some of the money lost fighting the war, began collecting taxes from the colonists. Since the colonists did not have representation in British Parliament, they felt the taxation was unjust. These factors led to the American Revolutionary War, which broke out in 1775 and ended in 1783. The war was fought in many battles throughout the thirteen colonies, and resulted in the Declaration of Independence, which was signed on July 4, 1776. The system of government was based on the Articles of Confederation, followed by the Bill of Rights.
The Louisiana Purchase of 1803 nearly doubled the size of the United States, and was followed by battles with Spanish colonists to claim Florida for the United States in 1819. Over the rest of the century, the United States continued to expand across the continent, with the annexation of Texas, the Oregon Territory, California, and the Southwest.
Slaves had been brought into the United States since colonial times, but slavery did not spread to each of these new territories. The tensions between slave states and free states built up, leading to the Civil War from 1861 to 1865, in which the southern slave states ceded from the Union, creating the Confederacy. The Confederacy lost the Civil War, and rejoined the Union, and the slaves were freed, though still segregated in the South for years to follow.
The United States remained neutral at the start of World War I in 1914, but entered the war on the side of the Allies in 1917. During World War II, after an attack on Pearl Harbor, the United States joined the Allies once again.

The government system of the United States is a federation that is a union of states with a degree of autonomy that are united by a centralized government. At the federal level, the government is divided into three branches: the Legislative, Executive, and Judicial. A bicameral Congress is made up of the Senate and the House of Representatives is made up of representatives from each of the states: each state has two senators, and the number of representatives in the House from each state is proportionate to the state's population.
The United States is further divided into fifty states and one federal district, Washington DC (District of Colombia). The states are governed by an elected governor, and are further divided into counties and cities. The states enjoy a bit of autonomy, and are able to make laws on issues not covered in the Constitution, have their own court system, and representatives.

Education System in the US

The education system of the United States is managed by the government at each level: federal, state, and locally through school districts. Public education is free and available to all students, and school attendance is compulsory from the age of five to somewhere between fourteen and eighteen, depending on the state. Aside from public schools, private schools and home schools are two other options for schooling in the United States.
Education begins with kindergarten at age five, though preschool beforehand is an option. After kindergarten, students progresses to grades one through twelve. Elementary education normally ranges from first grade through fifth or sixth grade. Middle school or junior high is typically from sixth or seventh grade through eighth. High school is from ninth grade to twelfth, with graduation around age 17 or 18. After completing high school, students can continue to college to earn an associate's or bachelor's degree. Institutions of higher education can be public or private, but most have tuition fees. Scholarships and financial aid are often available. The United States has a community college system, which offers two-year degrees called associate's degrees. Community colleges are located in many cities, and receive public funds to make college more affordable. Once completing an associate's degree, students at community colleges can then transfer to a four-year college if desired.
After attaining a bachelor's degree, students can continue to graduate or professional school to earn a master's degree, doctorate degree, or other professional degree.

The US economy is the world's largest national economy. The estimated GDP of the US in 2009 was $14.3 trillion which was measured as about 24% of nominal global GDP and 20% of global GDP at purchasing power parity. The US has huge natural resources including Petroleum and Gas, Iron ore, Coal and various other minerals. Agriculture is also quite developed and country has also huge fertile field. Above all, the industrialization is at the top. All advanced technologies and infrastructure made US as the most powerful and resourceful country. Due to huge geographical area, the climate type of the US is range from humid continental to temperate including Mediterranean also.