The given the Netherlands location map shows that the Netherlands is located in the western part of Europe continent. It shares international boundaries with Germany in the east and Belgium in the south. However, in the west North Seas lies and separates it from UK.

Where is Netherlands Located in the World Map 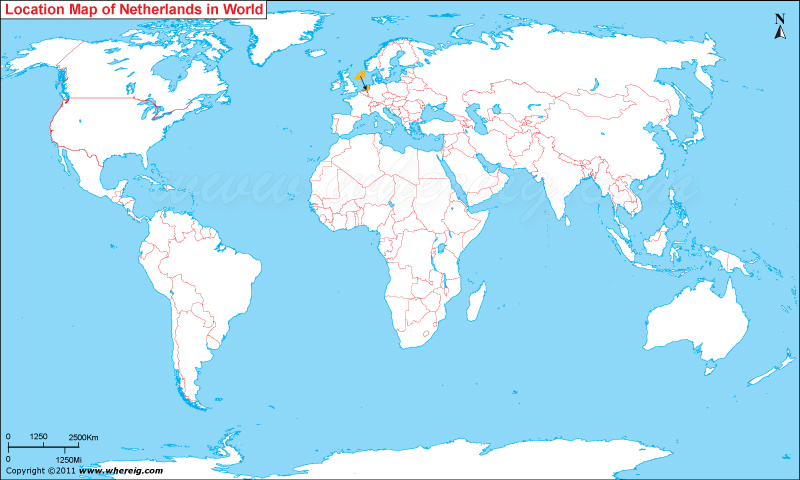 About Map: The map showing location of Netherlands in the World Map.

Where is Netherlands Located?

Netherlands, country located in northwestern Europe, also known as Holland. The Netherlands is bordered by the North Sea, Belgium to the south and Germany to the east. The government type of the Netherlands is parliamentary democratic constitutional monarchy. The capital city is Amsterdam; however, the seat of government is in The Hague. It is a member of the European Union, NATO, OECD, and WTO. Additionally, with Belgium and Luxembourg, it constitutes the Benelux economic union. The Netherlands more frequent referred as Holland and the term Dutch is used for the people and language of the Netherlands.

The climate type of the country is moderate maritime featured with cool summers and mild winters. Moreover, the economy of the Netherlands is quite strong and depends upon various resourceful sectors including shipping, fishing, trade, banking and major industries include chemicals, metallurgy, machinery, electrical, goods and tourism.

Amsterdam is the capital city and most populous city of the Kingdom of the Netherlands. The five largest cities in the Netherlands are Amsterdam, Rotterdam, The Hague, Utrecht and Eindhoven.

Information and Facts about Netherlands

Best Places to Visit in the Netherlands