Wyoming County Map, List of Counties in Wyoming with Seats

The U.S. state of Wyoming is divided into 23 Counties. Explore the Wyoming County Map, all Counties list along with their County Seats in alphabetical order and their population, areas and the date of formation. 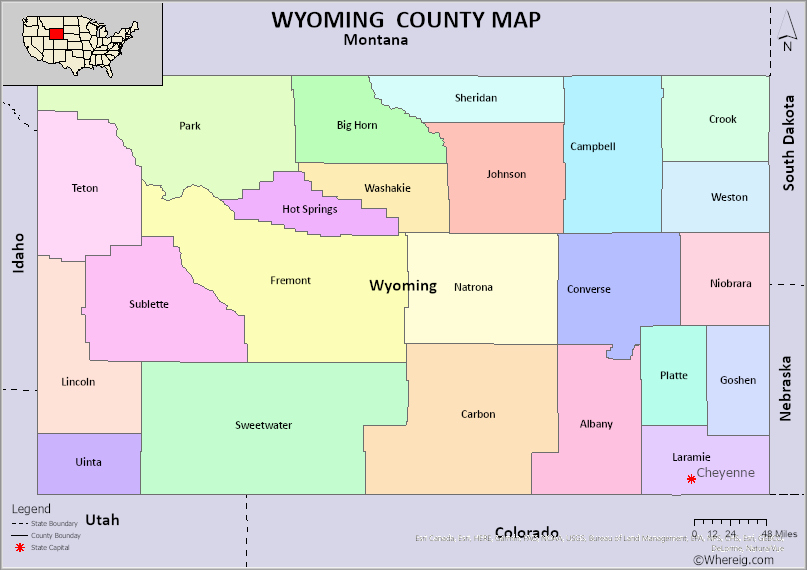 About Counties of Wyoming

U.S state of Wyoming is located in the western region of the country. Wyoming was admitted into the Union in the year 1890, as the forty- fourth state. It is the tenth biggest state in its size. It is the least populated state in the country. Wyoming is bordered by Montana in the northern side, South Dakota and Nebraska located towards east, Idaho is in the west, Utah to the southwest and Colorado to the south. According to the census of 2020, the population of the state is 576, 851. The capital city of the state is Cheyenne. It is the most populous city in the city. The state is nicknamed as the cowboy state.

Wyoming Counties are 23 in number. When Wyoming was admitted in the Union it had 13 states. Ten more counties were after the statehood. Among Wyoming Counties three of counties were renamed after their creation. They are Carter County which is later named as Sweetwater County, Hanover County was renamed as Washakie County and Pease County is called now as Johnson County. The largest county of all the counties of Wyoming is Sweetwater which is in fact bigger than six states of United States. The smallest county of Wyoming Counties is Niobrara County. The Laramie County has the highest number of population with 100,512. Natrona county and Campbell County are in second and third position in the list of highly populated Wyoming Counties. The wealthiest county in the state of Wyoming is Teton with $ 42,224. Campbell County and Sublette ranked as second and third wealthiest counties of the state. The five major cities of the state are Cheyenne, Casper, Laramie, Gillette and Rock Springs.

The U.S. state of Wyoming has 23 Counties. This is list of Wyoming Counties and County Seats in alphabetical order along with check their population, areas and the date of formation.