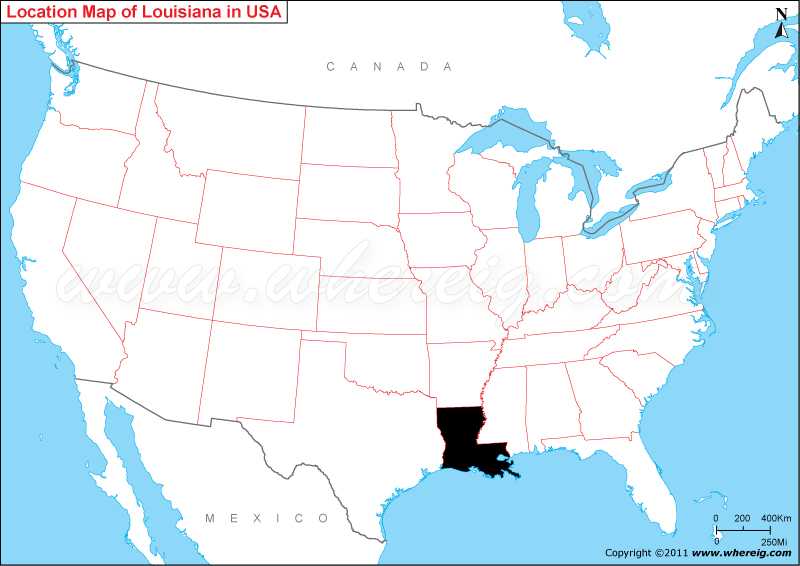 Map showing location of Louisiana on the US map.
As shown in the Louisiana location map that Louisiana is located in the southern part of United States. It bordered by the Texas in the west, Arkansas in the north, and in the eastern side Mississippi makes boundary with it. However, in the south Mexico Gulf makes coastline with it. Louisiana is the only state of the US that has political subdivisions known as parishes. Parishes have local government that tantamount to the counties.
Interestingly, some of the Louisiana urban cultures have multicultural and multilingual heritage. In fact, it has been highly influenced with an admixture of 18th century Spanish, French, and African cultures. These cultures are very significant in the US because of uniqueness. Actually, the reason behind these cultures is – initially, the region was the French and Spanish colony.
As you can see on the given map of Louisiana that it is a coastal state so it has subtropical humid climate (especially in the southern side) with some special feature of hurricane. Hurricane is tropical cyclone and typical feature in the coastal region of Louisiana; sometimes it very fatal for coastal lives.
The Louisiana US is also known for the tourism; Louisiana map US shows some of the important cities that have many tourists’ attractions. Some of the important cities are Baton Rouge (capital city), Bossier City, Lafayette, Alexandria, Lake Charles, New Orleans, Shreveport, and Monroe.
Moreover, the detail Louisiana map US also gives the idea of route guide by showing dense roadways and railways.