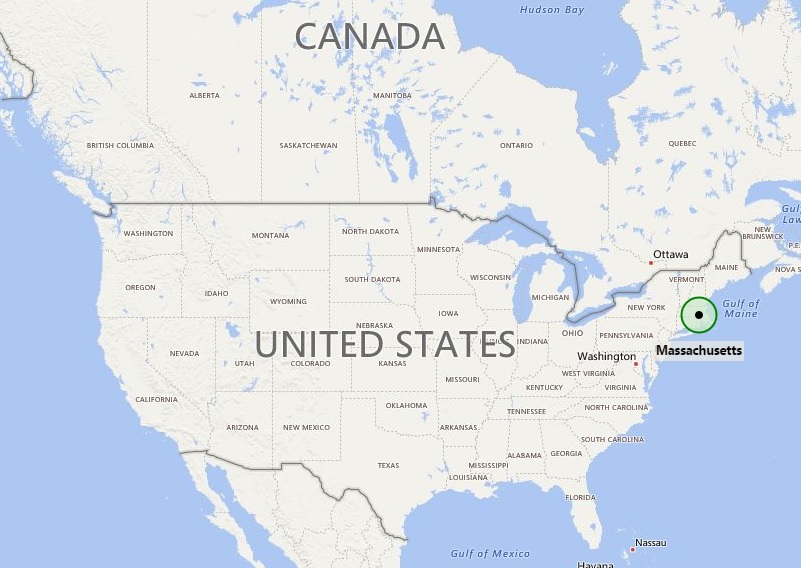 Map showing where is Massachusetts located in The US Map.

Massachusetts US is a state of the New England region; as shown in the given Massachusetts location map that Massachusetts is located in the north-eastern part of the United States.

On the given map of Massachusetts one can find - it is bordered by Connecticut and Rhode Island from the south, New York in the west, and New Hampshire and Vermont in the north. However, in the eastern side of Maine Atlantic Ocean lies.

The Massachusetts is the education capital of the world because of the Harvard University situated in the Cambridge city. Today, the state is a leader in higher education, health care, high technology, and financial services. State’s more than 6.6 million populations live in the Boston metropolitan city. Boston is the capital city of the state. By taking help of the given Massachusetts map US one can find it the eastern half of the state comprises of urban, suburban, and rural areas, whereas Western Massachusetts is largely rural.

Throughout the history, Massachusetts US has been popular and in news; this is the first place of English settlement and also one of the first places that became the centre of US freedom movement. Above all, its city Boston is more popularly known as “Cradle of Liberty” for the agitation that led to the American Revolution for the independence from Great Britain; one of the most significant incidents in the history i.e. “Boston Tea Party” had been happened here. And, in the modern era Massachusetts again in news because it is the first U.S. state that legally recognizes same-sex marriage.