Michigan is a state in the Great Lakes and Midwestern regions of the United States. Michigan share borders with US states of Ohio, Wisconsin, Indiana, and it shares a water boundary with Illinois and Minnesota and the Canadian province of Ontario. 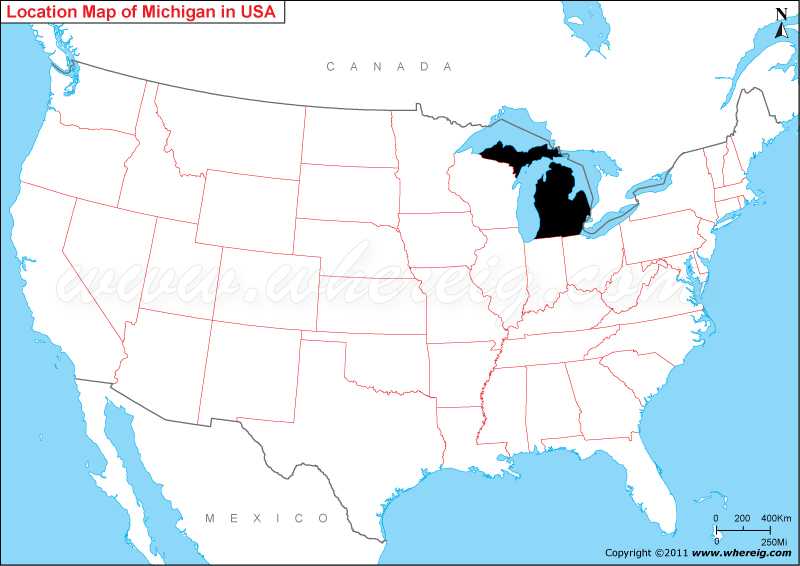 About Map: Map showing location of Michigan on the US Map.

Where is Michigan Located?

As shown in the location map of Michigan that Michigan is located in the Great Lakes Region of the United States. Being located in the Great lakes region, the state is not single continuous land area rather made up of two small pieces of lands or peninsula, which is separated by the Lower Peninsula by the Straits of Mackinac. The Upper Peninsula is much significant economically for the Michigan state US because of availability of natural resources. Besides, this region is also an attraction of point for the tourists as well

It has the longest freshwater shoreline of any political subdivision in the world, being bounded by four of the five Great Lakes, plus Lake Saint Clair. In 2005, Michigan ranked third among US states for the number of registered recreational boats, behind California and Florida.[6] Michigan has 64,980 inland lakes and ponds. A person in the state is never more than six miles (10 km) from a natural water source or more than 87.2 miles (140.3 km) from a Great Lakes shoreline. It is the largest state by total area east of the Mississippi River.

As given on the map of Michigan US that the state shares International boundary i.e. with Canada. Michigan borders Ohio and Indiana on the south, in the north-western side Wisconsin makes boundary with the Michigan. As you can see on the Michigan map US, the state largely makes its border with water body; western boundaries are almost entirely water boundaries, from south to north.