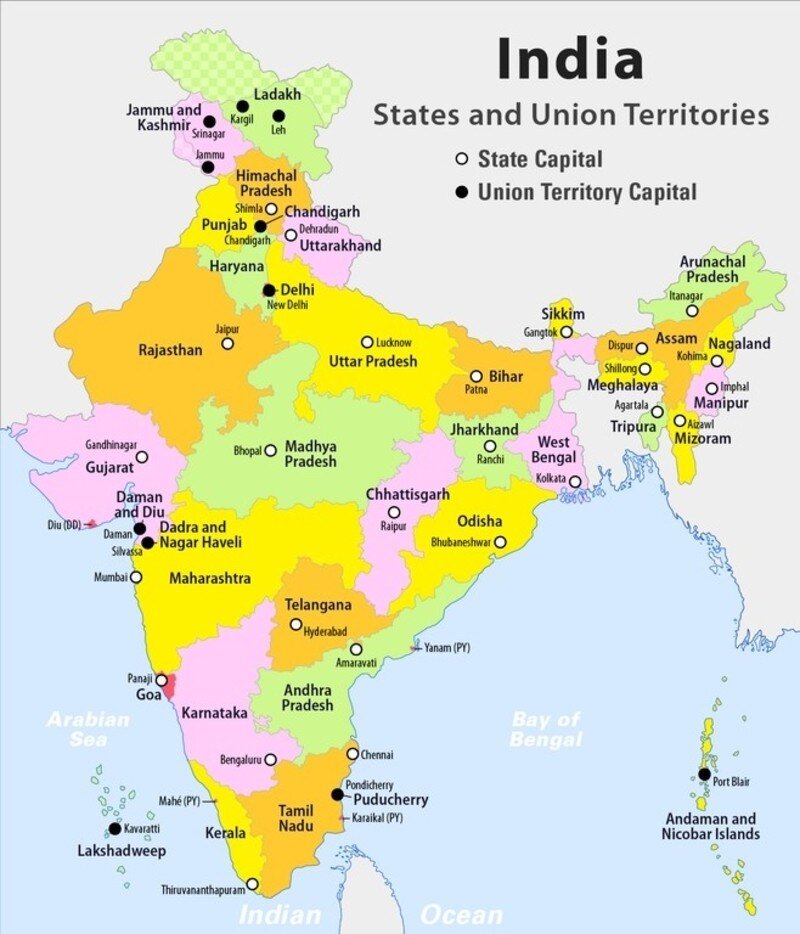 About Map: Map Showing Capitals of 28 States and 8 Union Territories.

Here we have covered the list of the Indian States, Union Territories, and their capitals.

8 Union Territories and Capitals of India

List of Indian States, Union Territories and Capitals of India

India according to the preamble of Indian constitution is a sovereign, secular, socialist, democratic, republic country. India follows democratic parliamentary system. There are 28 states and 8 Union territories in India. Union Territories are governed by President of India. The President is the executive head of the country and the Governors are the executive heads of states. The state governments resemble the union government. The state governments are governed by Chief Ministers.

The government of India consists of three branches. They are Executive, Legislature and Judiciary. Executive branch is headed by the President of India who continues his tenure for a period of five years. The Prime Minister of India is the head of the government and in fact he enjoys and exercises most of the executive powers.

Calcutta was the former capital of India. In the year 1911 King George the Fifth passed a law that the capital of British India should be moved from Calcutta to Delhi. The capital of India is New Delhi and Union Territory. New Delhi is also called as National Capital Territory of Delhi. It is the home for the three branches of India. We have Rashtrapati Bhavan, Parliament house and the Supreme Court of India. Even though the New Delhi is the capital of India but Financial city is Mumbai. It is considered so because Mumbai has a lot of financial organizations like Reserve Bank of India, Stock Exchange Market of Bombay and headquarters of many multinational and corporate companies are located there. Hence it is called Mumbai is called as the Financial Capital of India.

The capital of Andaman and Nicobar Islands is Port Blair, Chandigarh is capital for Chandigarh. Daman is capital of union territory called Dadra and Nagar Haveli and Daman and Diu. The capitals of Delhi U.T and Lakshadweep U.T are New Delhi and Kavaratti. Puducherry which is also known as Pondicherry capital is Pondicherry. Jammu and Kashmir have got two capitals Srinagar in Summer season, Jammu in winter season. Leh is the capital of Ladakh.

States and Capitals of India

According to The States Reorganization Act 1956, the states of India were organized based on linguistic lines. There are 28 states and 8 Union Territories in India now. India consists of 400 cities altogether. India has eight metropolitan cities and they are Kolkata, Mumbai, New Delhi, Chennai, Hyderabad, Bangalore, Ahmedabad and Pune. The Prime Minister of India planned to develop 100 Smart cities in India in the future. Indore bagged continuously 4 times the award of Smart city.

Maharashtra is one of the most important states of India which is in the western and central peninsular part of India. The capital of the state is Mumbai. Mumbai is known the financial capital of India.

West Bengal is one of the major states of India. West Bengal is formed on 26th January 1950. The capital of West Bengal is Kolkata (Calcutta) which was known as our former capital of India. It is second largest state that produces tea. The attractive tourist places are here in the state and some of them are Darjeeling, Sunderban grooves and Baksa Pahar, etc.

Madhya Pradesh is one the largest states of India. It is situated in central India. Bhopal is the capital of Madhya Pradesh. The state is known as the “Heart of India.” The most famous and historical place in the state is Khajuraho where a lot of temples are there.

Gujarat is the fifth largest state in India. The state is very poplar for its traditional attire, food, natural landscapes, White Desert which is called as Rann of Kutch, Colourful handicrafts. This is the state where Father of our Nation was born. The capital city of the state is Gandhi Nagar.

Assam is a state of Republic India which is known for its wildlife, archeological sites and tea plantation. Dispur is the capital of Assam. The biggest city in the state is Guwahati. The state is famous for tea and silk.

Bihar is in eastern India. It became part of India after the independence. The capital city of the state is Patna which was Pataliputra. It is a historical state. Bihar was ruled by Magadha dynasty. The major cities of Bihar are Patna, Gaya, Bhagalpur, Muzaffarpur, etc.

Chhattisgarh is a state that is located in east- central region of India. The state is full of forests. Raipur is the capital city of Chhattisgarh. The other important cities of the state are Durga-Bhilai, Bilaspur, Rajnandgaon, Korba, Raigarh and Jagdalpur.

Punjab is a state of Republic India. Punjab is a neighbouring state of Pakistan. There are five rivers in Punjab. The capital of Punjab and Haryana is Chandigarh. The state was founded on 1st of November 1966.

Chandigarh is a union territory and serves as the capital of the states of Punjab and Haryana.