Michigan, a state, is in the Midwestern region of the United States. The capital of Michigan state is Lansing and the Largest City is Detroit. Michigan is the tenth most populous state, with a population of approximately 10 million, the 11th most extensive state by area. The Michigan state map shows the borders of the state of Michigan in the United States, and the major roads in the state, along with some of the Great Lakes. 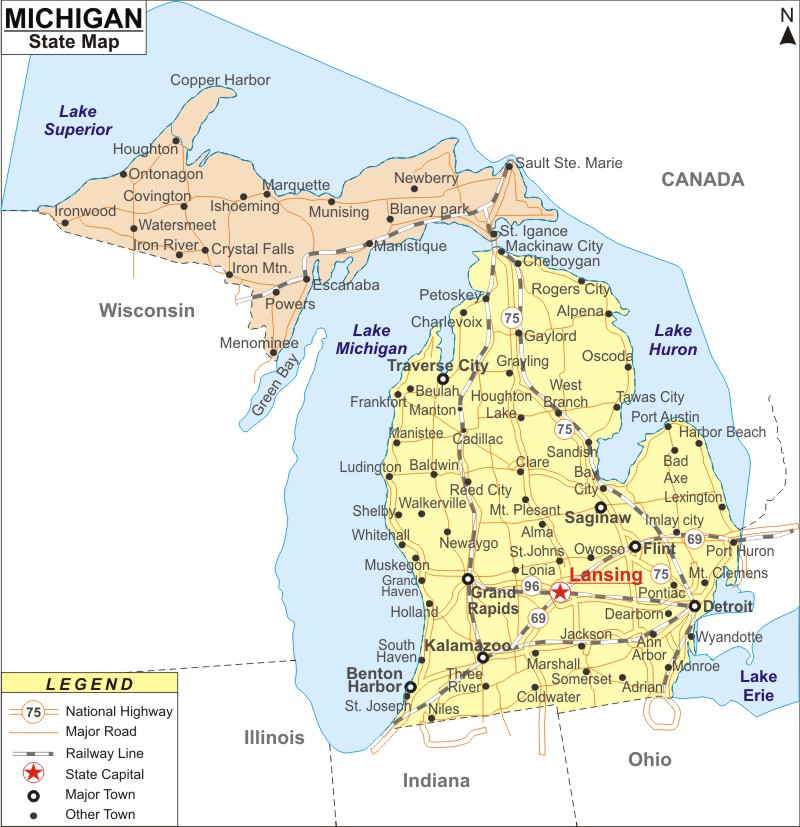 Michigan is a state in the Midwestern USA, bordering Wisconsin, Indiana, and Ohio, shares water boundaries with Illinois and parts of Canada. Known as the Great Lake State, Michigan is surrounded by four of the five Great Lakes, and thus has the longest freshwater boundary of any state or country in the world.

The capital of Michigan is Lansing, which is centrally located on the Lower Peninsula. Other major cities in Michigan include Detroit, Ann Arbor, and Grand Rapids.

Michigan is easily reachable by car, train, or airplane. Interstate 75 and Interstate 69 join northern Michigan with the southern part of the state. Eastern Michigan is connected to the western part by Interstate 96, Interstate 94, and Interstate 196. The railway in Michigan help in the easy accessibility around the state, and the passenger train is often the cheapest and comfortable mode of transportation around Michigan. The main rivers in Michigan include St. Joseph, Grand, Muskegon, Pere Marquette, Manistee and Kalamazoo. Michigan has about 850 golf courses. The Huron Hills Club and Grand Traverse Resort and Spa are some of the notable golf clubs in Michigan.