Kentucky County Map, List of Counties in Kentucky with Seats

The U.S. state of Kentucky is divided into 120 Counties. Explore the Kentucky County Map, all Counties list along with their County Seats in alphabetical order and their population, areas and the date of formation. 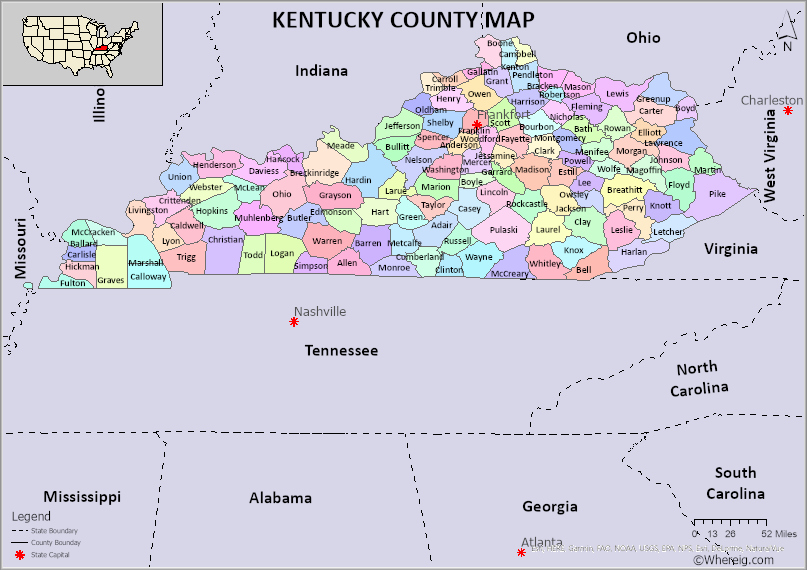 About Counties of Kentucky

Kentucky is a state in the United States of America. Kentucky was accepted and considered as one of the states of Union in the year 1792. The environs states of the Kentucky are Tennessee which is located to the south, Missouri is situated to the west, Illinois and Indiana to the northwest and Ohio lies in the north and northeast. The capital city of the state is Frankfort. The capital city is very popular for its magnificent and splendid capitol buildings. The state was nicknamed as Bluegrass state as state has a lot lush green fields to which blue-purple buds appear during spring. Hence it is called like that. The population of Kentucky is expected to have reached 4.51 million by 2021 that ranks as 25th state in terms of population. Kentucky is spread across 39486 square miles that accounts for 102269 square kilometers.

Kentucky has three branches of the government. They are Executive branch which is headed by the governor, Legislative branch that consists of General Assembly and Senate and Judicial branch the supreme power is given to the supreme court. Every County has its own legislative council which is known as fiscal court. By law the fiscal court may either be consisting of three commissioners or judges of the county.

The U.S. state of Kentucky has 120 Counties. This is list of Kentucky Counties and County Seats in alphabetical order along with check their population, areas and the date of formation.