Illinois is a landlocked state in the east north-central US, located in the Midwest region of the United States. Illinois is located at a latitude of 40.6331° N and a longitude of 89.3985° W. The state is bordered by Iowa and Missouri to the west, Kentucky to the southeast, Indiana to the east, Wisconsin to the north and Michigan via a water boundary in Lake Michigan to the northeast. 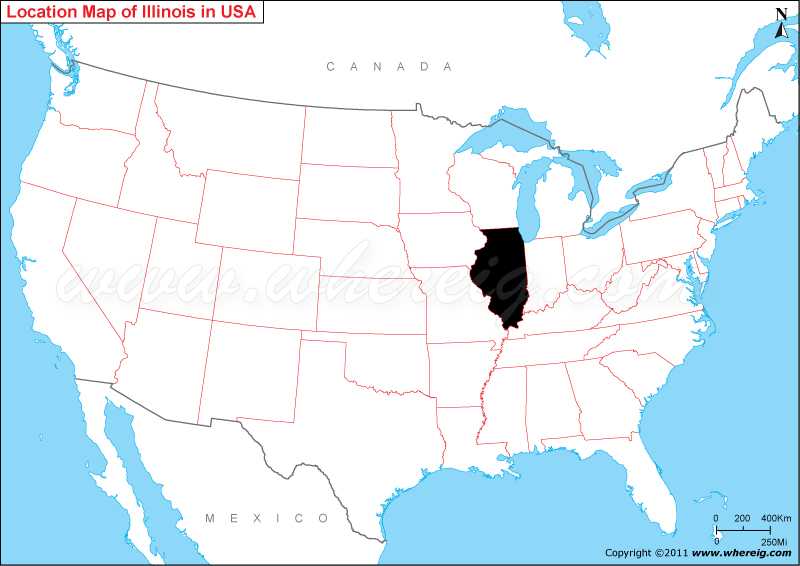 About Map: Map showing location of Illinois on the US Map.

As shown in the Illinois location map that Illinois is located in the north-central part of the US. Illinois state US is world famous because of its city Chicago; it has one of the busiest airports of the world. However, the state is surrounded with some of the most industrialized states of the US. In addition, the Illinois state US is full of natural resources including coal, petroleum, and timber. The state has also large percentage of fertile land. Above all, it is a transportation hub of the US.

Admitted as the 21st state of the US, Illinois shares its boundary with Wisconsin in the north, Iowa in the west, Missouri in the south west, Kentucky in the south and south-east, and Indiana in the east. However, as you can see on the given map of Illinois state that the small north-east portion of the state makes coastline with Lake Michigan.

With the humid continental type of climate, the state has many features that make it significant such as Ronald Regan one of the American Presidents was the native of this state, some of the other Presidents of the US elected as President while they were living in Illinois including, Abraham Lincoln, Ulysses S. Grant, and Barack Obama.