Where is the Super Bowl This Year 2023? When & Where to Watch, Location Map, Date & Time 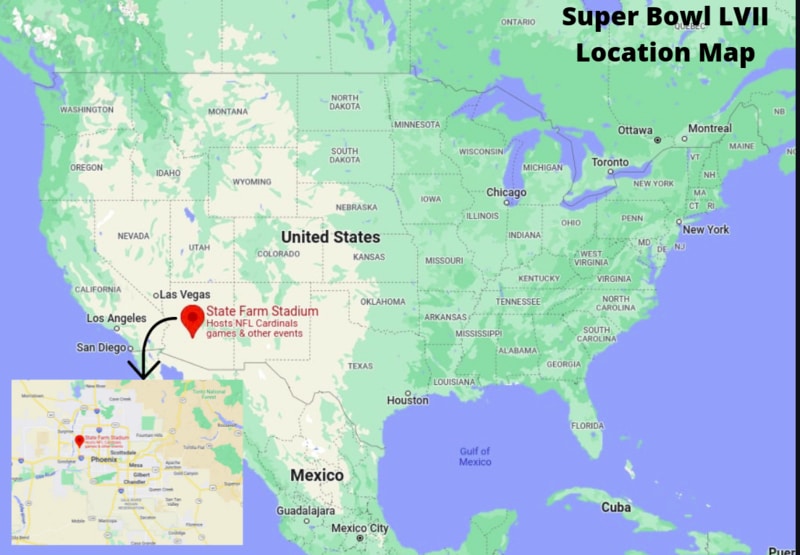 Super Bowl 2023 scheduled to be held in the city called Glendale, Arizona in State Farm Stadium.

When precisely is Super Bowl LVII?

Super Bowl LVII will be broadcasted from Arizona on February 12, 2023, by FOX and its family of networks. The game will commence at 6:30 p.m. ET with season opener following shortly after. Tony Romo and Jim Nantz will issue the clarion call from the State Farm Stadium broadcast booth. FOX will telecast the Super Bowl for the second time in three seasons, marking the network's 20th Super Bowl broadcast, the most in league history. Additionally, FOX Network, the network's streaming service, will carry the game. Look through this list of FOX affiliates to find the Television channel in your area.

Super Bowl 2023 will kick off on February 12, 2023 in the United States. The NFC and AFC champions will square off at Glendale, Arizona's State Farm Stadium. Given below are the timings of Super Bowl 2023.

Super Bowl LVI was held in SoFi Stadium located at 1001 Stadium Dr, Inglewood, Los Angeles, CA on Sunday, February 13, 2022. The game was played on the second Sunday in February.

Where is SoFi Stadium located?

SoFi Stadium located in Inglewood, about a 3 miles from Los Angeles, California, United States. 20-minute drive from Los Angeles International Airport and immediately southeast of Kia Forum. SoFi Stadium, which opened in September 2020. The stadium is located in Hollywood Park, an entertainment complex. SoFi Stadiu will host the 2028 Summer Olympics and Paralympics opening and closing ceremonies.