Louisiana County Map, List of parishe in Louisiana with Seats

The U.S. state of Louisiana is divided into 64 parishes (counties). Explore the Louisiana County Map, all Counties list along with their County Seats in alphabetical order and their population, areas and the date of formation. 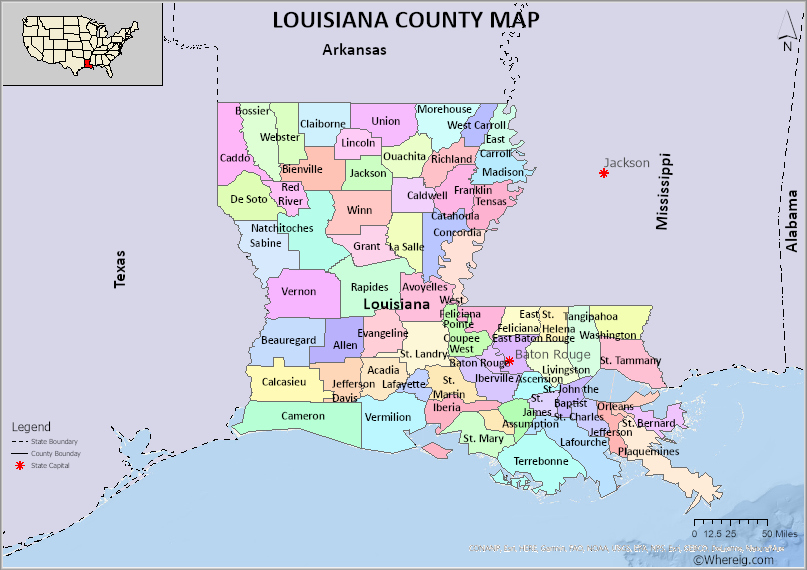 About Counties of Louisiana

Louisiana is one of the 50 states that exists in the southern part of the United States of America. The capital city of Louisiana is Baton Rouge. The capital building of the state is in fact the largest capital building of fifty states in United States. The state shares the borders with Texas to the west, Arkansas to the north, Mississippi to the east and the Gulf of Mexico to the South. The state has got a nick name called ‘The pelican State’.

Louisiana is unique in its political divisions and administration. The sub-divisions are called Parishes which are similar to counties. The number of Parishes in Louisiana are sixty- four in number. They are the basic divisions of the state. Most of the Parishes are governed by elected body called Police Jury. To be specific, forty one out of sixty-four parishes governed by Police Jury. The remaining twenty-three parishes have got different forms of government like president council, council manager, Parish commission and consolidated parish city. The type of government that exists in the parishes are similar to the commission of the counties. The Police Jury has got official power to exercise for about fifty different functions. Many of the parishes can elect its own government its own Police Jury.

Among the Parishes of Louisiana Plaquemines Parish is the biggest Parish by area which has got 2,429 square miles that accounts for 6,291 Kilometers. The smallest parish in the state is West Baton Rouge Parish. East Baton Rouge Parish has got most population among all the parishes of the state. The least populous parish is Tensas Parish.

The largest city of Louisiana is New Orleans. This city is known as crucible as it has got many cultures and traditions. New Orleans is famous various festivals and celebrations, exciting night outs and parties and music and so on. The richest town in Louisiana is Central and Monroe is considered as the poorest city in the state.

The U.S. state of Louisiana has 64 parishes (counties). This is list of Louisiana Counties and County Seats in alphabetical order along with check their population, areas and the date of formation.