Nebraska County Map, List of Counties in Nebraska with Seats

The U.S. state of Nebraska is divided into 93 Counties. Explore the Nebraska County Map, all Counties list along with their County Seats in alphabetical order and their population, areas and the date of formation. 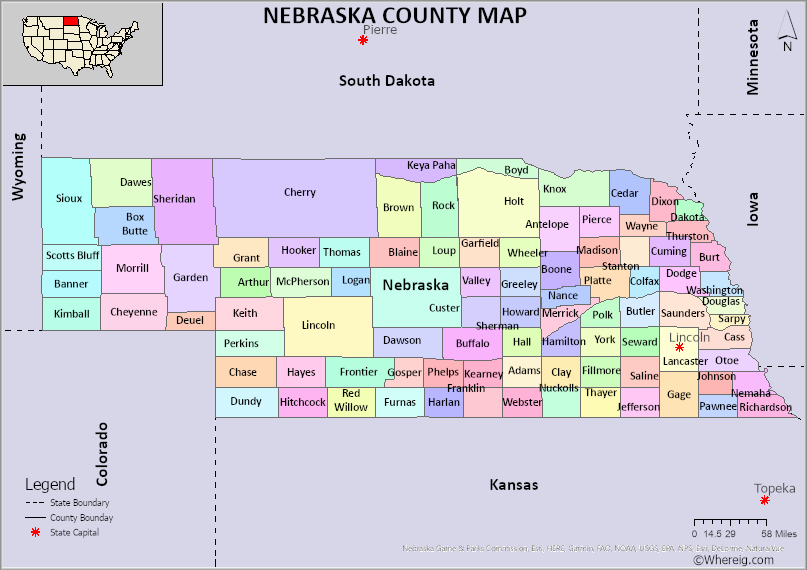 About Counties of Nebraska

Nebraska is a state in the United States which is located in Midwestern part of the country. Nebraska was granted statehood on 1 March 1867. It was 37th state to be admitted to the Union. Nebraska is bordered by South Dakota to the north, Iowa lies to the east; Kansas is located in south and Wyoming to the west. Nebraska is spread over 76824 square miles and that accounts for 198974 square kilometres. The capital of Nebraska is Lincoln. US state of Nebraska has two main land regions. They are the Dissected Till Plains which covers hills and the biggest cities of the state like Omaha and Lincoln, and the Great Plains which is mostly treeless meadow.

US State of Nebraska also follows federal form of the government which consists of three branches namely Executive branch, Legislative branch and judicial branch. The local government of Nebraska consists of 93 counties, 895 cities, towns and villages. Nebraska Counties are further sub-divided into organized townships for the ease of governing. These are administered by board of supervisors. The Nebraska Counties are governed by commissioners of counties.

The U.S. state of Nebraska has 93 Counties. This is list of Nebraska Counties and County Seats in alphabetical order along with check their population, areas and the date of formation.