Alaska is the largest U.S. state by area 663,268 square miles (1,717,856 km2), and 48th most populous state of the 50 states of United States. The Alaska Map offers vital information on the exact location and diverse topography of the state. Alaska is located in the northwestern part of North America. According to the U.S. Census Bureau data of July 1, 2019, Alaska's population is 731,545. The state's capital is Juneau, which is prominently marked on the map, as are other important cities, Anchorange and Fairbanks. Alaska is politically sub-divided into 16 Boroughs for administrative purposes. 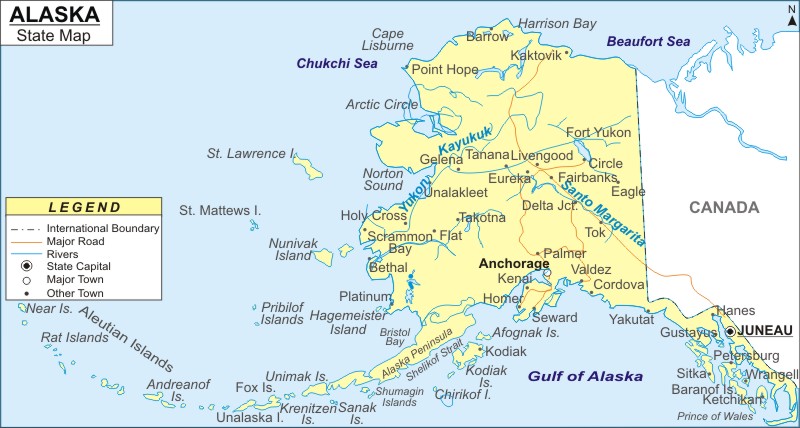 The Alaska State map depicts location of various cities, rivers, road and railway networks, counties and their respective seats, museums, and national parks. Covering the northwestern part of North America, Alaska spans over a total area of 663,268 sq. miles. The state is bordered by Canada on the east, the Beaufort Sea and Arctic Ocean in the north, the Bering Sea and has a maritime border with Russia in the west, and the Pacific Ocean and Gulf of Alaska in the south

Having an organized infrastructure of railways, roadways, and airways, Alaska is also accessible through waterways. The Alaska Map indicates the national and interstate highways. In addition, the railway map points out the prime train routes of the state. 11 census zones along with 16 boroughs collectively form the basis for the counties of Alaska. Tourists coming to Alaska can visit the well-maintained golf courses of the state such as Chena Bend, Sleepy Hollow, Eagleglen, and many more. The Kobuk Valley National Park, Yukon Charley Rivers National Preserve, and Katmai National Park & Preserve are some of the most visited national parks of Alaska. Museums are yet another major appeal of the state. Pratt Museum, Kodiak Baranov Museum, Alaska State Museum are some of the most popular. The Alaska State map, in a way, presents an illustrative overview of each aspect of the place.

The various areas of Alaska are well-connected with good roads, which are highlighted on the Alaska State Map. The northern and southern parts of Alaska are interconnected by State Roads 3, 4, 7, 9 and 11. State Roads 1, 2, 5, 6, 8, and 10 connect the eastern and western sides of the state. The Kebuk, Kuskokwim, Noatak, Yukon, Sustina, Tanana and Colville Rivers are the state's major streams.