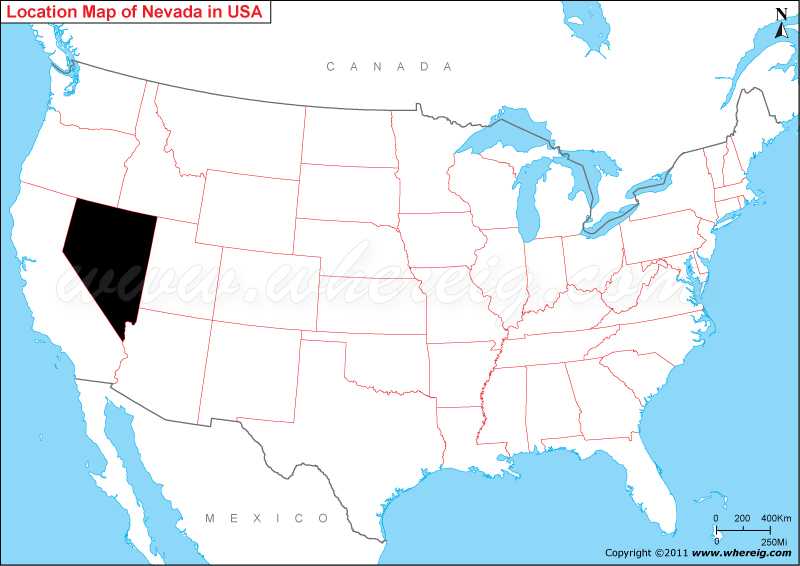 Map showing location of Nevada on the US map.


Where is Nevada Located?

The given Nevada location map shows that Nevada is located in the south-western part of US. Map of Nevada also illustrates that it shares its state borders with Utah in the east, Idaho and Oregon in the north, California in the west, and Arizona in the south-east.
Most of the areas of Nevada are desert located in the Great Basin area. Capital city of Nevada is Carson City; however, about two-thirds population of state lives in and around the Las Vegas metropolitan area. Interestingly, the state name Nevada is derived from the nearby Spanish mountain name i.e. Sierra Nevada Mountains; the meaning of it is snow-capped mountain range.
Nevada is officially known as the Silver State because of the significance of silver to its history and economy. It is also known as the "Battle Born State" because it achieved statehood during the Civil War and the "Sagebrush State" for the local eponymous plant. In addition, Nevada is the fourth largest producer of gold in the world.
Moreover, due to establishment of legalized gaming and lenient marriage and divorce proceedings in the 20th century, Nevada became a major tourist destination. In subsequent time, the tourism industry in Nevada became the largest employer.