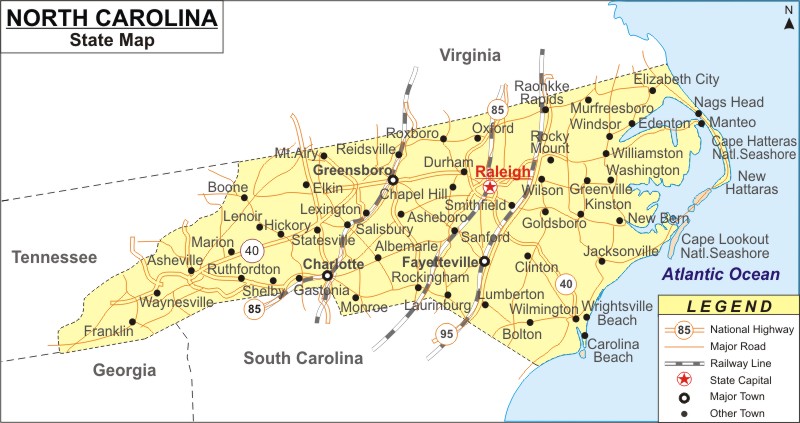 North Carolina is a southeastern state, nestled between the Appalachian Mountains and the Atlantic Ocean. Varied landscapes like beaches, hills, mountains and barrier islands make North Carolina a great place to spend time outdoors. Great Smoky Mountains National Park and Cherokee Indian Reservation are a few of the options for experiencing the beauty of North Carolina, which can be accessed via the famous Blue Ridge Parkway. As one of the original thirteen colonies, North Carolina has a long history and several flourishing and historic cities. Charlotte is situated in the southwestern part of the state and holds the title of largest city in the state, while the capital, Raleigh has a more central location in the state, not far from Greensboro and Chapel Hill. One of North Carolina's claims to fame is that its coastal city, called Kitty Hawk, was the location of the Wright Brothers' first successful powered flight.

Before European contact, North Carolina had been inhabited by several Native American tribes, including both Algonquian- and Iroquoian-speaking groups. North Carolina was first colonized by Spanish explorers in 1567, but their settlement last only a short time, because the settlers were taken out by the native tribes.

British explorers arrived and settled the area in 1584, after which a colony was founded that had been chartered by Sir Walter Raleigh. The settlement at Roanoke Island has come to be known as the Lost Colony because historians are still unsure of what happened to end the settlement after such a short time. In the 1640s, British settlers began migrating from Virginia down to the region that would become the Carolinas. In 1663, King Charles II granted a charter to a group known as the “Lords Proprietor” who could then colonize the area within defined boundaries. Until about 1712, the Carolinas were mostly treated as one governmental unit and the settlers focused on the port region of Charleston, South Carolina.

During the American Revolutionary War, North Carolina sent troops to fight, but did not see many battles on its land. The state joined the Union in 1789, after first rejecting the U.S. Constitution, to become the twelfth state. During the Civil War, North Carolina seceded from the Union with the rest of the south, and continued to struggle with race relations for many years to follow.

Charlotte - The largest city in North Carolina with over 874,579 people, Charlotte is the second largest financial center in the United States. Uptown is home to many businesses like Bank of America.

Raleigh - The capital of North Carolina, Raleigh is its second largest city. Along with Durham and Chapel Hill, Raleigh is part of the Research Triangle.

Other large cities in North Carolina include Greensboro, Winston-Salem, Fayetteville, Wilmington, and Asheville. The other cities with populations of over 50 thousands are given below.

Travelers visit North Carolina to experience its natural beauty, with outdoor recreation at its beaches, camping, hiking, skiing, and viewing the vibrant fall colors in the mountains. The cities of North Carolina offer historic neighborhoods and architecture, as well as cultural activities and athletic events. North Carolina has several professional sports teams, as well as many college sports team. Charlotte is known as a NASCAR city, with about three-quarters of NASCAR employees or drivers residing there, as well as the NASCAR Hall of Fame.