Iowa County Map, List of Counties in Iowa with Seats

The U.S. state of Iowa is divided into 99 Counties. Explore the Iowa County Map, all Counties list along with their County Seats in alphabetical order and their population, areas and the date of formation. 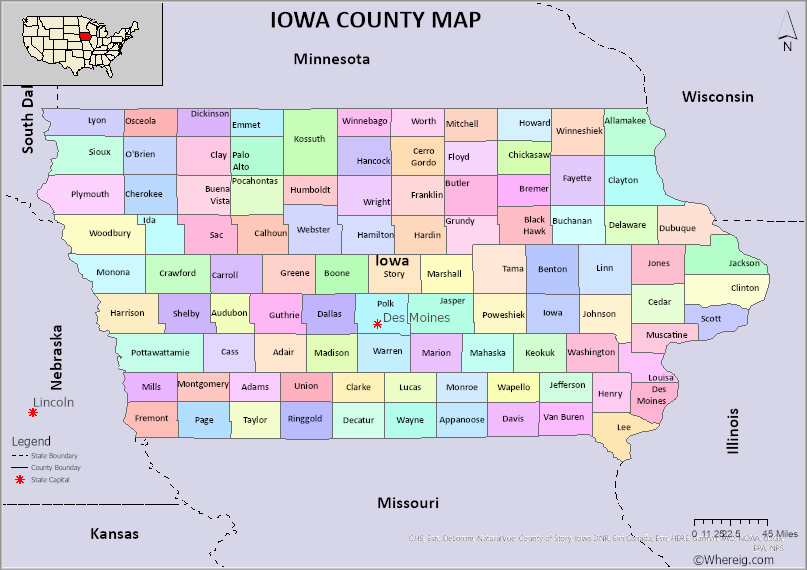 About Counties of Iowa

Iowa is a state of United States of America which is situated in midwestern region of the country. The state is bordered with Wisconsin to the northeast, Illinois positioned to the east, Missouri to the south, Nebraska to the west and Minnesota to the north. The state is very popular as it excelled in science and technology, invention and creativity. Iowa was an administrative district of French and Spanish colonies during 18th and 19th centuries. The state ranks as the 26th state in terms of having area in the country. Iowa has the total area of 55857 square miles. According to the 2020 census the population of Iowa was 3,190,369 and indeed the 31st most populous state of all the states of United Nations. The former capital city of the state was Iowa city but now Des Moines; it is the largest city in the state which has 210,723 population.

The state of Iowa was divided into 99 counties for the administrative purpose. Iowa has 947 cities. Among all the cities of the state Den Moines is the largest in area and population. The smallest city of the state in terms of population is Beaconsfield and Le Roy. Dickinson is the tiniest city of area. Iowa is number one state in producing corn. The state depends on agriculture and manufacturing sectors for its income.

The famous places to visit in the area are National Mississippi River Museum and Aquarium, National Czech and Slovak Museum and Library, the state Capitol building Maquoketa Caves State Park and Amana Colonies.

The U.S. state of Iowa has 99 Counties. This is list of Iowa Counties and County Seats in alphabetical order along with check their population, areas and the date of formation.