Turkey officially he Republic of Turkey, is a country in the Middle East that bridges Europe and Asia. It's lies between latitudes 39.0° North and longitudes 35.00° East. 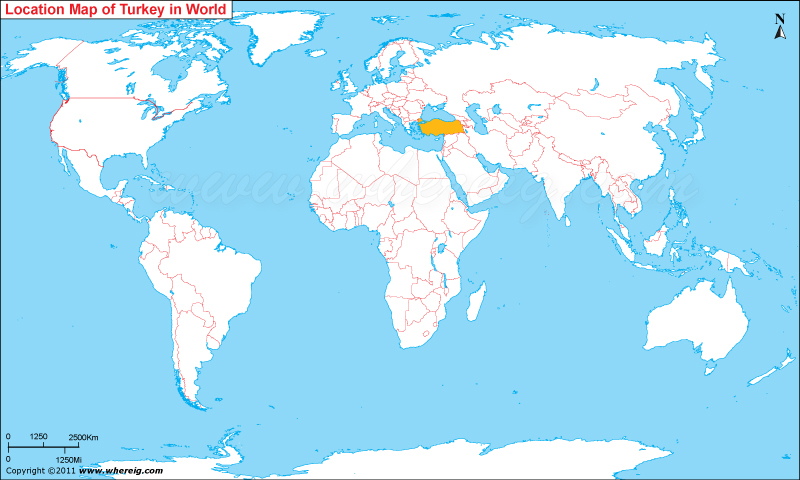 About Map: Map showing Where is Turkey located in the World Map.

Where is Turkey Located?

Turkey is a country located in the Western of Asia, Turkey Peninsula on the northeastern coast of the Arabian The given Turkey location map shows that Turkey is located in the western Asia and Eastern Europe. Likewise, Turkey is Eurasian country; though, its larger geographical area is in Asia and only small area is in Europe. Turkey map also illustrates that it shares its international boundaries with Greece in the west; Bulgaria in the northwest; Georgia in the northeast; Armenia, Azerbaijan, and Iran in the east; and Iraq and Syria in the southeast. Besides, the Mediterranean Sea lies in the south; the Aegean Sea lies in the west; and the Black Sea lies in the north. The climate type of Turkey ranges from a temperate to Mediterranean climate. The summers are generally hot and dry and winter are mild and wet.

The capital city of Turkey is Ankara. The government type of Turkey is secular parliamentary representative democratic republic featured with multi-party system. Under this system, the head of state is the Prime Minister and the President is the head of state but he has largely ceremonial role along with substantial reserve powers. Turkey is a member of the Council of Europe, NATO, OECD, OSCE and the G-20 major economies.

What is the capital of Turkey?

Ankara is the capital city of Turkey. Ankara is located in the Central Anatolia Region of Turkey.

Places of Attractions in Turkey?