The given Malaysia location map shows that Malaysia located in the south-east of Asia. Malaysia is a group of islands along with the mainland which is attached with Thailand through the thin land strip known as Kra isthmus.

Where is Malaysia Located in the World Map 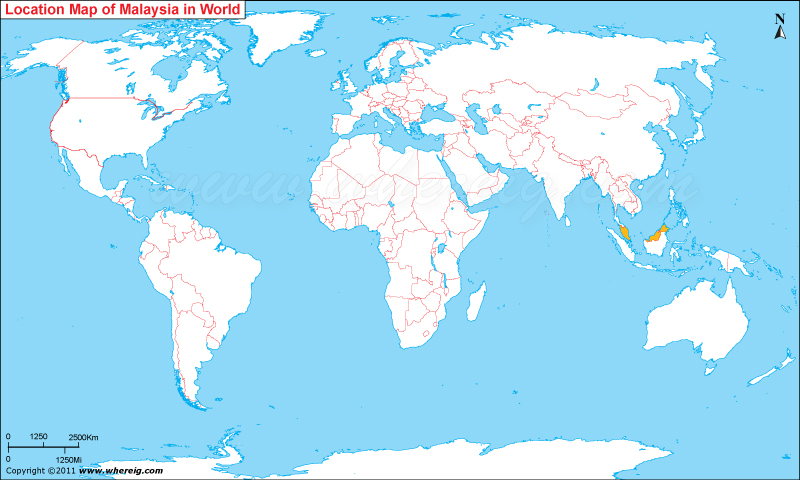 About Map: The map showing location of Malaysia in the World Map.

Where is Malaysia Located?

Malaysia, country of Southeast Asia between Singapore, Thailand and Indonesia. Hence, the Malaya peninsula shares its international boundary with Thailand; on the other hand, on the Borneo Island, Malaysia shares its international boundaries with Indonesia in the western part and Brunei in the north and north-east. Above all, these large two land-masses of Malaysia are separated by the South China Sea. Interestingly, the neighbor country Singapore is connected with the Malaya Peninsula through a bridge.

The government system of Malaysia is an example of the Westminster parliamentary system and also the legal system is example of English Common Law. The head of state is usually an elected monarch but chosen from the hereditary rulers of the nine Malay states for the term of five years. The head of government is the Prime Minister.

The region is rich in terms of its natural resources; hence, its economy is largely depends upon the mining, agriculture produce, and other secondary sector including manufacturing. Malaysia is multi-ethnic and multi-cultural; it influences its culture and plays a large role in politics. In the recent years, tourism in Malaysia has grown substantially; above all, by understanding the benefit of tourism, even the government is promoting the tourism, science sector, commerce and medical tourism on the Malaysian territories.


Information and Facts about Malaysia