Map of Cities in Texas, List of Texas Cities by Population

This is list of largest, popular Cities & towns in Texas by population and area in sq mi. The largest cities of Texas are Houston, San Antonio, Dallas, Austin and Fort Worth. 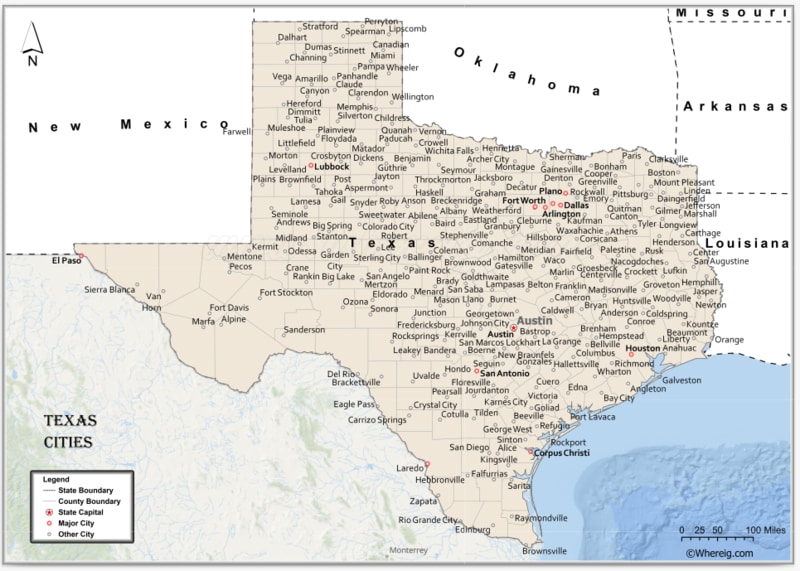 Texas is a state located in the West South Central United States. Texas is the 2nd most populous state with population of 29,145,505 residents as of 2020 United States Census data, and the 2nd largest by land area, It cover an area of 261,232 square miles (676,587 km2). The state is divided into 254 counties and Texas municipalities include 966 cities, 232 towns, and 22 villages. Austin is the capital city of Texas.

Among the cities in Texas Houston is the state's most populous city in the state and the fourth-most populous city in the United States. San Antonio has the second-highest population in the state of Texas and is the seventh-largest city in the United States. Dallas and Austin are respectively the third and fourth most populous cities of Texas. Austin is the city, which is the capital of Texas that borders the Hill Country region. Fulshear has experienced the fastest growth in Texas over the last decade than any other cities in Texas. The best city in Texas to live and lead a decent life as it is the state capital. It is also named as ‘Live Music Capital of the World’.

Given below is the list of cities in Texas along with their population.

This is list of Cities and towns in Texas by population, land area in sq mile, county and density.