England Flag - The National Flag of England consists of a white field (background) with a red cross known as the Cross of St. George. 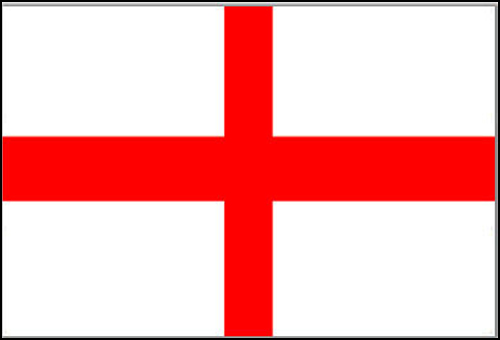 The English flag has become a famous symbol for England in athletic events in recent years, and it is especially associated with both national and international football. Many English sports teams' jerseys have been created using the flag's design as inspiration.

The English flag has served as an emblem for English soldiers and naval vessels throughout history since it was first adopted in the late Middle Ages. The United Kingdom's flag, the Union Jack, was created in 1606, and it includes elements from the flag of England.

The Crusades, during which many Christian nations used a cross as a sign to demonstrate their ties to Christianity, which also employs a cross as a symbol, can be linked as the origin of the English flag. Philip II of France and Henry II of England both carried a white cross during the Crusades in 1188, but at some point the English armies switched to carrying a red cross.

According to mythology, Richard the Lionheart adopted the red cross as a representation of St. George at the same time as St. George was named the patron saint of England. However, this is contested because several countries, including the Republic of Genoa, at the time used the red cross as their insignia.

The red cross on a white background was initially employed by English forces in an official capacity during Edward's reign I in the 1270s, and there are documents of Edward I ordering the St. George's cross to be used on banners as a "national emblem." Saint George was the patron saint of soldiers, which accounts for the flag's relationship with him.

During Henry VIII's reign in 1545, the flag of England was first used as a naval flag. The red cross and the blue and white St. Andrew's Cross of Scotland were merged to produce the first iteration of the Union Jack when England and Scotland united with the Union of the Crowns in 1603. Since both flags had previously been used to represent England, it wasn't until the 19th century that the St. George Cross and the Union Jack were separated from one another. The Union Jack is now used to symbolize the United Kingdom, while the flag of England is solely used to symbolize England.