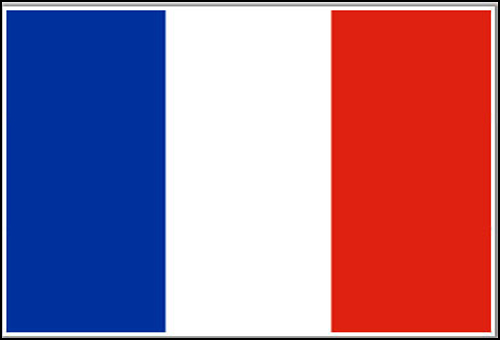 Flag of France: France's national flag is a tricolor with three vertical stripes that are blue, white, and red in color. Even though the flags of Ireland and other countries are also known by this name, English people refer to it as the Tricolor. Although not the original tricolor, the design was adopted after the French Revolution and went on to become one of the most significant flags in history. Many other countries in Europe and beyond later adopted the tricolor pattern, which has historically stood "in symbolic antithesis to the despotic and clericalist royal standards of the past," according to the Encyclopaedia Britannica.

France possessed a large number of flags during the ancient regime, and many of its military and naval flags were ornate and amenable to creative interpretation. The state flag was inspired by the royal coat of arms, which is a blue shield with three golden fleurs-de-lis. That shield was typically shown upon the Bourbons' accession to power over a white backdrop.

Following the French Revolution of 1789, attention turned back to simple flag designs that captured the profound changes that were occurring in France's social, political, and economic life. Paris's traditional colors of blue and red, along with the Bourbon regal white, were favorites of the city's revolutionaries. The red, white, and blue horizontal stripes of the Dutch flag, which first appeared in the middle of the 17th century, also had an impact on the revolutionaries. The red, white, and blue stripes were added to the navy's white flag in 1790, forming three equal vertical stripes within a frame of the same hues. Four years later, the Tricolor was designated as the official national flag for use by the general populace, the army, and the navy. The stripes were now blue-white-red. France and all of its controlled territories have flown just the Tricolor as their national flag. The individual colors and shapes in the Tricolor's design of France Flag do not have any particular symbolism, like many early national flags.