The national flag of Japan is officially called Nisshoki, meaning sun-mark flag, is a white rectangular flag with a large red disk (representing the sun) in the center. The Japanese flag was officially adopted on February 27, 1870. 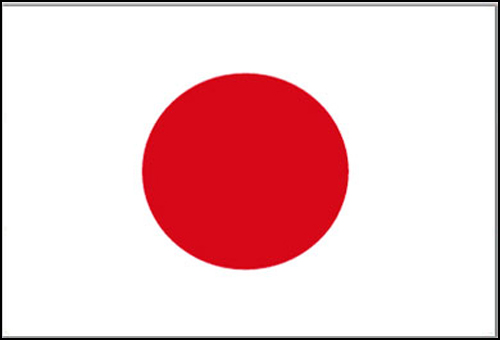 Japan Flag: The national flag of Japan is a rectangle of white cloth with a red-and-crimson circle in the middle. The Nisshōki is the actual name of this flag, but the Hinomaru is its well-known nickname in Japan. The phrase "The Land of the Rising Sun" perfectly describes it.

The Act on National Flag and Anthem, which was enacted on August 13, 1999, designates the Nisshoki flag as the country's flag. The sun-disc flag had already established itself as Japan's de facto national flag, despite the fact that no national flag had been specified by earlier legislation. The early Meiji period's governing body, the Daij-kan, issued two proclamations in 1870, both of which included specifications for the national flag's design. Under Proclamation No. 57 of Meiji 3 and Proclamation No. 651, respectively, a sun-disc flag was approved as the national flag for merchant ships and as the flag flown by the Navy.

According to legend, the sun goddess Amaterasu, who was related to Jimmu, the first emperor of Japan, created the country in the seventh century BC. Even today, the emperor is referred to as the "Son of the Sun," and the phrase "Land of the Rising Sun" is frequently used to refer to the nation. The use of a sun flag in Japan was first documented in writing in the year 1184, although there are oral traditions that go back much further.

According to the ancient history book Shoku Nihongi, Emperor Monmu displayed a flag with a sun theme in his court for the first time in recorded Japanese history in 701. The oldest known Japan flag, which predates the 16th century, is kept in Unp-ji Temple in Ksh, Yamanashi. According to an antiquated tale, Emperor Go-Reizei donated the flag to the temple in the 11th century. The sun disc and the Rising Sun Ensign of the Imperial Japanese Navy and Army were significant emblems in the new Japanese Empire during the Meiji Restoration. The flag was portrayed as a symbol of national pride and patriotism in propaganda posters, novels, and movies.

During national holidays, festivities, and other events deemed appropriate by the government, inhabitants of Japan were obliged to fly the flag in their homes. Throughout the Second Sino-Japanese War and subsequent battles, the public became fond of a variety of devotional mementos to Japan and its Emperor that featured the Hinomaru pattern. These mementos ranged from messages scrawled on the flag to apparel and kitchenware decorated to look like the flag.