Home >Africa Map > Where is Cameroon 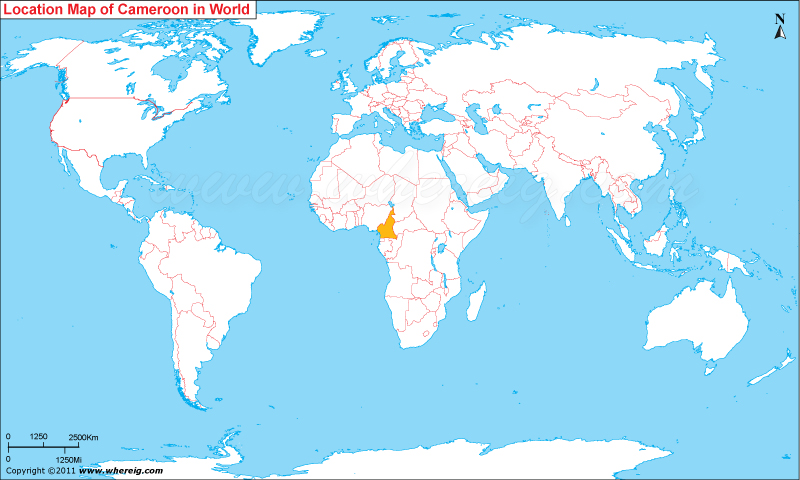 About Map: Map showing where is Cameroon located in the World.
The given Cameroon location map shows that Cameroon is located in the central western part of the Africa continent. Cameroon map also shows that it shares international boundaries with Nigeria in the west, Chad in the north-east, Central African Republic in the east, and Gabon, Equatorial Guinea and Republic of the Congo in the south. Besides, country has also small coastline opening at Bight of Bonny in the Atlantic Ocean.

Interestingly, Cameroon is known as "Africa in miniature" because of its geological and cultural diversity. Natural landscapes in the country are beaches, mountains, deserts, rainforests, and savannas regions. Surprisingly, Cameroon homes more than 200 different linguistic groups. However, French and English are two official languages in Cameroon. Above all, Cameroon is more famous for its native music, predominantly makossa and bikutsi. Country is also known for its football sports.

In comparison to other African countries, Cameroon is more stable in terms of Governance; there is political stability and country remains aside of civil war and other disputes generally. Cameroon’s infrastructure is also well developed. The President of Cameroon has huge powers to administer government agencies, formulate policy, command the armed forces, make and ratify treaties. Above all, the president appoints government officials at all levels, starting from the prime minister to the provincial governors.
The economy of the country is depends upon the agriculture industries, petroleum, and timber industries.