Home >Africa Map > Where is Guinea-Bissau 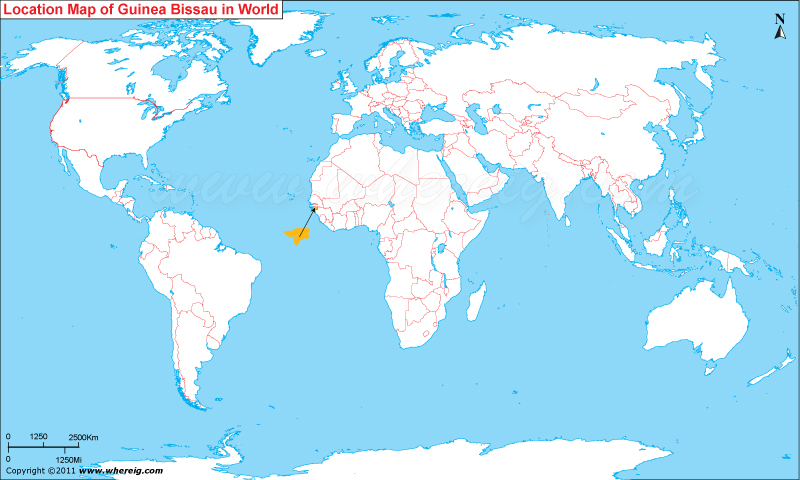 About Map: Map showing where is Guinea Bissau located in the World.
As shown on the Guinea-Bissau location map, Guinea-Bissau is located in the western part of Africa. Guinea-Bissau map depicts clearly that it shares its international boundaries with Senegal in the north, and Guinea in east and south-east. Besides, the Atlantic Ocean limits its further extension towards west.
The tragedy with the country is, about 14% people speak Portuguese i.e. the official language of the country, about 44% people speak Kriol language and remaining percentage of people speak native African language.

The government type of Guinea-Bissau is a republic. The president use to be the head of state and the prime minister is the head of government. There is a unicameral National People's Assembly (Assembleia Nacional Popular) consisting of 100 members. Guinea-Bissau is also a member of some of the international organization including the African Union, Economic Community of West African States, the Latin Union, Community of Portuguese Language Countries, the South Atlantic Peace and Cooperation Zone, Organization of the Islamic Conference, and La Francophonie.

As it is clear from the Map of Guinea-Bissau that it is a coastal country hence, it has warm climate round the year with little temperature difference. The average rainfall on the territory of Guinea-Bissau is about 2,024 millimetres largely taken place between the months of June and October.
The economy of Guinea-Bissau is largely depends upon agriculture; and the important products are cashew nuts and ground nuts which are being exported. Besides, fishing is also significant in the country.