Home >Africa Map > Where is Chad 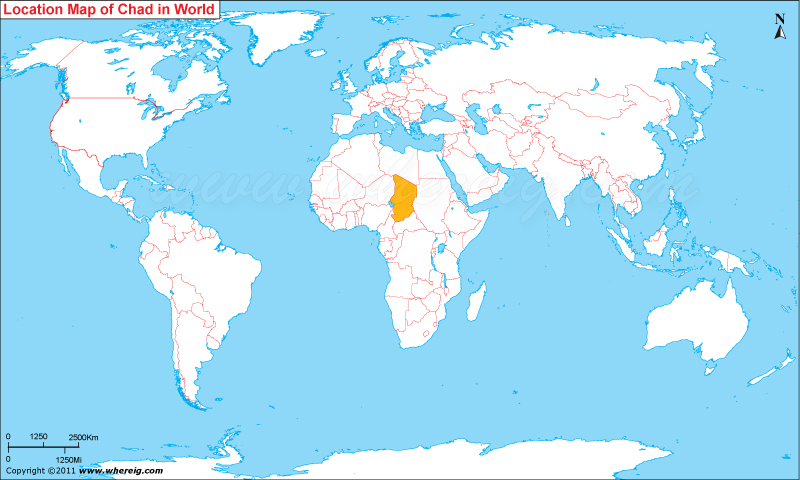 About Map: Map showing where is Chad located in the World.
The given Chad location map shows that Chad is located in the central part of Africa continent.
Chad map also shows that Chad is a landlocked country bordered with Central African Republic in the south, Cameroon and Nigeria in the southwest, Niger in the west, Libya in the north, and Sudan in the east. Largely country has desert climate, this is the reason that some people also call it "Dead Heart of Africa".

Geographically, Chad is divided into some of the important regions based upon their physiographic characteristics. For example north zone is a desert zone, central zone is an arid Sahelian belt, and in the south a fertile Sudanese savanna zone. Country has a big Lake namely Lake Chad, probably country’s name kept after this largest wetland in Chad and the second largest in Africa. Chad's highest point is the Emi Koussi in the Sahara. Chad homes more than 200 different ethnic and linguistic groups. There are two official languages i.e. Arabic and French and also two religions i.e. Islam and Christianity those are largely practiced throughout the country.

Though, the country got its independence in the year 1960 under the leadership of François Tombalbaye. But the country remained deprived of political stability for long times due to civil war. Very recently, the Darfur crisis in neighbor country Sudan has again destabilized the nation because hundreds of thousands of Sudanese refugees living in and around camps in eastern Chad.

Chad is considered as very poor country where corruption is widespread. The people of Chad are herders and farmers. However, due to oil discovery, country revenue increased substantially. It also beat the traditional cotton industry.