Home >Africa Map > Where is Benin 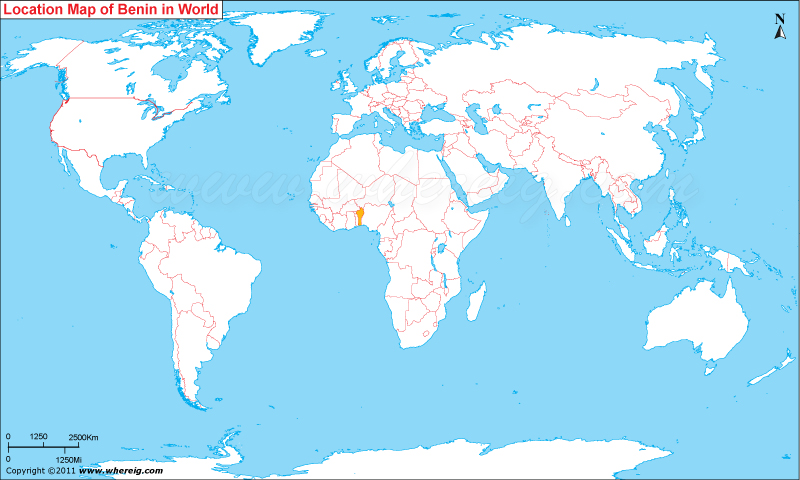 About Map: Map showing where is Benin located in the World.
Benin is a country located in West Africa. Benin shares its international boundaries with Togo in the west, Nigeria in the east, and Niger and Burkina Faso in the north.
Benin limits its further southward extension. Benin is a tropical and sub-Saharan country that largely depends upon agriculture and hence substantial employment and income arise from subsistence farming.
Government type of Benin is presidential representative democratic republic, where the President of Benin is head of the state as well as head of the government, supported by the multi-party system. Furthermore, the capital of Benin is Porto-Novo, but the seat of government is situated in Cotonou country's largest city.

French is the official language of Benin; however, some of the indigenous languages including Fon and Yoruba are usually spoken. The chief religious group in Benin is Roman Catholicism, followed by Muslims, Vodun, and others. Besides, Benin is a member of many international organizations including the United Nations, the African Union, South Atlantic Peace and Cooperation Zone, the African Petroleum Producers Association, the Niger Basin Authority, and the Community of Sahel-Saharan States.

Where is Benin on the world map? What is shape of Benin? Both questions are interesting. Benin is a long narrow strip shaped located in the western Africa. It positioned between the Equator and the Tropic of Cancer. By virtue of having coastal location, Benin's climate is hot and humid. Average annual rainfall in the coastal area is about 1300 mm. likewise, Benin has two rainy and two dry seasons every year.