Yosemite National Park is an American national park located in eastern central California in the United States. It lies between Latitude 37.8651° N and Longitude is 119.5383° W. The park is famous for its for its waterfalls, deep valleys, towering granite monoliths and ancient giant sequoias. The best times to visit Yosemite National Park are May and September. 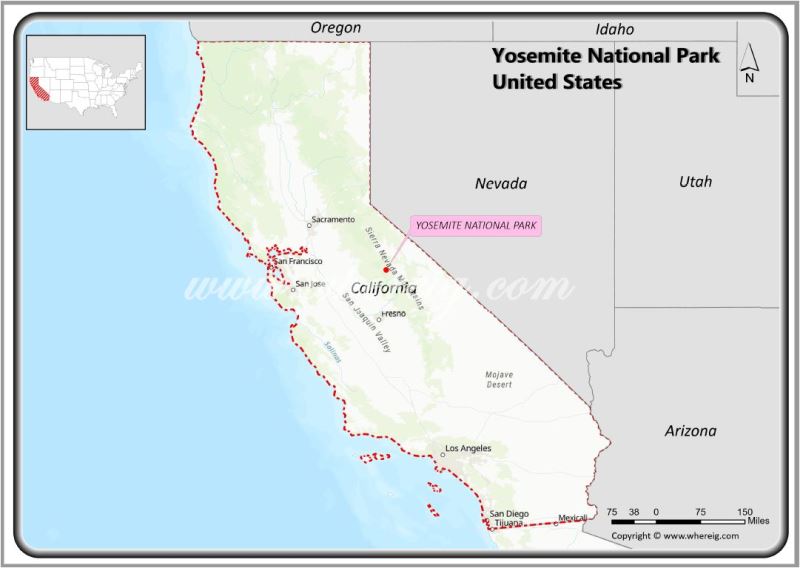 Where is Yosemite National Park Located?

Established on October 1, 1890, Yosemite National Park is an American national park located in California. The national park is surrounded by the Stanislaus National Forest on the northwest and by Sierra National Forest on the southeast. The park has a total area of 759,620 acres and stretches to a total of four countries namely, Tuolumne, Mariposa, Mono and Madera County. Yosemite National Park was designated as a World Heritage Site in 1984. This national park is one of the largest habitat blocks present in the Sierra Nevada and has a variety of plant and animal species.

Climate - Yosemite National Park has a dry summer temperature climate which is known as the Mediterranean climate. In this type of climate, precipitation falls when there is mild winter and the other seasons are almost dry.

Habitat - Since the park has an elevation range from 648 m to 3,997 m, it has five broad vegetation zones which are lower montane forest, subalpine zone, chaparral and oak woodland, upper montane forest and alpine. More than 160 rare plants, unique soils and local geologic formations are found at this national park. Yosemite National Park has over 250 species of vertebrates and mammals. Mixed coniferous forests, Douglas fir, sugar pine, incense cedar, white fir, and canyon live oak are some of the trees found in this national park.

Public accessibility of the park - The park is open around the year and visitors can indulge in various activities such as nature walks, photography and art classes, stargazing programs, tours, bike rentals, rafting, mule and horseback rides, and rock climbing classes.