Niagara Falls located at the border of New York and Ontario. Here is all about places to visit near Niagara Falls, tourist attractions, best time to visit, things to do, facilities, facts and locaion map of Niagara Falls. 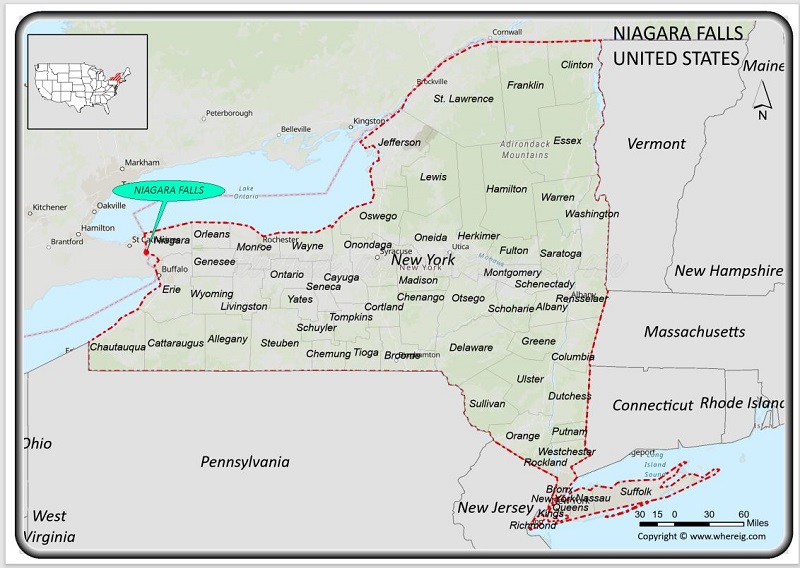 About Map: The map showing the location of Niagara Falls in the United States and in Canada.

Where is Niagara Falls Located?

Niagara Falls has been collectively named as a group of three waterfalls - Horseshoe Falls, Bridal Veil Falls and American Falls that spans the border between the U.S. state of New York and the Canadian province of Ontario. Amongst these three waterfalls, Horseshoe Falls is the largest one. The Niagara River forming the Niagara Falls drains into Lake Erie into Lake Ontario which has the highest flow rate amongst waterfalls in North America. Niagara Falls was formed when the glacier started melting at the end of the Wisconsin Ice Age, making a way for running water from the newly formed Great Lakes to cross Niagara Falls on its way to the Atlantic Ocean. Niagara Falls not only serves recreational purposes but also has commercial and industrial uses. Here are some facts you should know about Niagara Falls:

Height of Niagara Falls - The waterfall is 57 m high wherein the American Falls has a height somewhere between 21 and 30 m as it has giant boulders at its base. The width of the Horseshoe Fall is approximately 790 m.

Niagara Falls Tourism - Mass tourism is witnessed during the summertime as it is a beautiful attraction for visitors.

Attractions of Niagara Falls - Casino Niagara, Maid of the Mist, Spanish Aero Car, Table Rock Scenic Tunnels, Marineland, IMAX Theatre and the new Butterfly Conservatory are some of the major man-made attractions of this place.

Best Things to Do in Niagara Fall

Top Places to Visit in the U.S.