Where is Kauai Island, Hawaii?

Kauai is Hawaii's fourth largest island and also Known as the "Garden Isle", Kauaʻi lies 73 miles (117 km) across the Kauaʻi Channel, northwest of Oahu. Here is all about places to visit near Kauai Island, tourist attractions, best time to visit, things to do, facilities, facts and locaion map of Kauai Island. 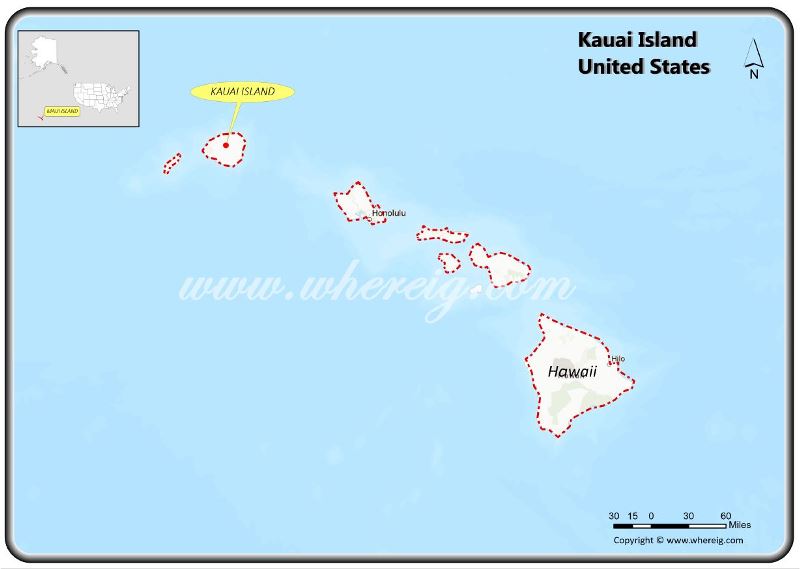 About Map: The map showing the location of Kauai Island in the United States.

Where is Kauai Island Located?

Know all about Kauai Island

Geography of Kauai Island - The origins of this island is volcanic as the passage of the Pacific Plate over the Hawaii hotspot forms it. It also has a shield volcano with a diameter of 15.0–20.0 km.

Highest Peak of Kauai Island - Kawaikini is the highest peak on Kauai Island at 5,243 ft. Mount Waiʻaleʻale, which is at the centre of the island, is the second-highest peak.

Climate of Kauai Island - The island has a tropical climate and is generally humid throughout the year. The precipitation at the lower elevations varies from an average of about 130 cm on the northeastern shore to less than 51 cm on the leeward side of the island.

Best Things to Do in Kauai Island

Top Places to Visit in the U.S.