Map of New England States, USA - Division of Northeastern US

The New England region, is one of the nine Census Bureau Divisions of the United States. 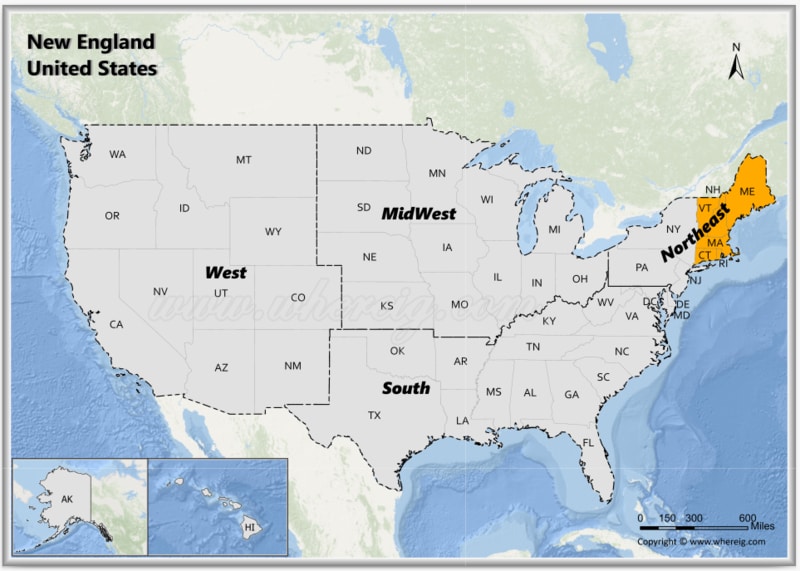 To name a few, Connecticut is renowned for its top-notch universities, stunning fall colors, and significant cultural achievements. Connecticut, one of the original 13 colonies, is revered in American history as the birthplace of numerous inventions, traditions, and artistic creations. The Northeastern American state of Maine is famous for its rugged shoreline, untainted forests, and outdoor sports. Maine is renowned for its numerous lighthouses, delectable lobsters, and independent spirit. Hiking, camping, fishing, kayaking, and whale viewing are all available to visitors to Maine.

The state of Massachusetts is well recognized for its numerous schools and universities, including the first American university, Harvard. The Mayflower and the Pilgrims' landing in Massachusetts, one of the original 13 colonies and one of the six New England states, is undoubtedly the state's most well-known claim to fame. The first Thanksgiving, the first telephone, the first post office, and the first subway system, all took place in Massachusetts, a state with a rich history.

New Hampshire is famous for its breathtaking natural scenery, its role in the American Revolution, the manufacture of granite, and its thriving arts and cultural sector.

The world's center for costume jewelry production is Rhode Island. About 80% of all costume jewelry is made there. It should come as no surprise that Rhode Island's coastline is one of its most notable features given that it is known as the "Ocean State" for its extensive coastline with sizable inlets, which makes up around 15% of its total area.