Map of Pacific States, USA Region- Division of Western US

The Pacific region, is one of the nine Census Bureau Divisions of the United States. 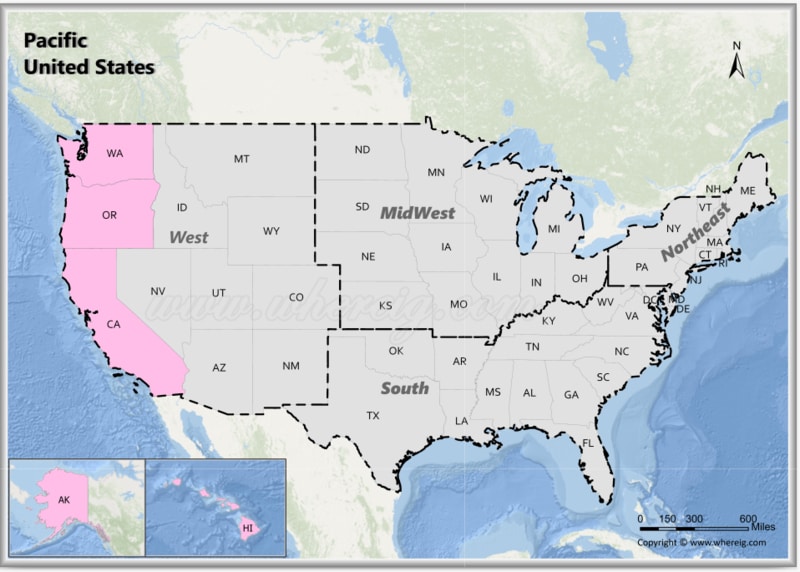 There are various definitions of which states make up the West Coast of the United States, but California, Oregon, and Washington are universally considered to be a component of that definition. However, since all of them are in North America, the term typically refers to the three contiguous states as well as Alaska. Hawaii and the other four states are considered to be a part of the West Coast for census purposes. Alaska and British Columbia are included in the region of North America that is referred to as the Pacific Coast by Encyclopaedia Britannica. Hawaii is listed as being a part of the area in the encyclopedia, but the editors noted that it "had very little connection geologically with the mainland states."

The West Coast of the United States has a Mediterranean climate from Northern California to the U.S.-Mexico border, but it has an oceanic climate along its Northwestern, Northern, and Eastern edges toward the U.S.-Canada border. While the majority of coastal California has year-round dryness, the northern portion of the west coast, particularly coastal Washington and Oregon, experiences modest rainfall, especially during the winter months. The Democratic Party has dominated West Coast politics in recent history, with the exception of Alaska, and the states consistently support Democrats in elections at all levels. Since 1992, Democrats have won four of the five West Coast states' presidential votes, including three that have done so since 1988. The West Coast's culture is significantly younger than that of the East Coast because immigrants and their offspring arrived there more recently. Furthermore, its population makeup contributes to its cultural distinction from the rest of the United States.

Most Viewd US Links