Jamaica, is an island country of the West Indies. It is the third largest island in the Caribbean Sea and the fourth-most populous country in the Caribbean. It is lies between latitudes 18.1096° North and longitudes 77.2975° West. 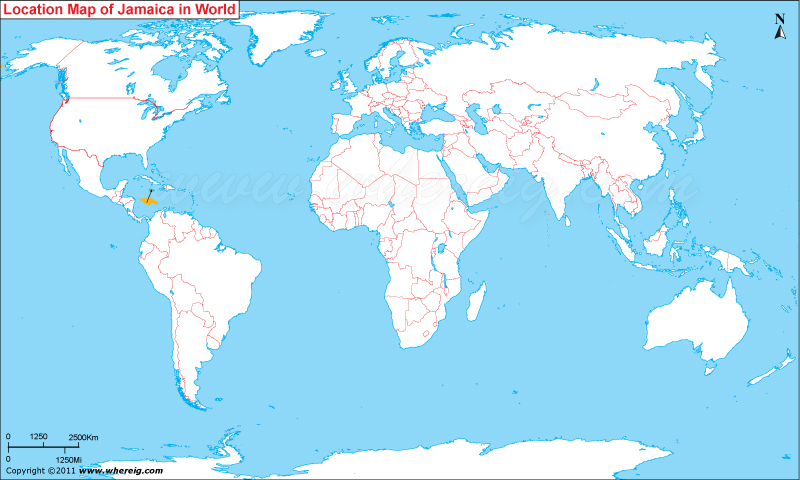 About Map: Map showing Where is Jamaica located on the World Map.

Where is Jamaica Located?

Jamaica is an island country located in the Caribbean Sea. It is part of the Greater Antilles a group of islands. Cuba is located about 145 kms north of the country and about 190 kms east the Hispaniola, the island constituting of the nation-states Haiti and the Dominican Republic located. Kingston city is the capital and largest city of the country.

The government type of Jamaica is a parliamentary democracy and constitutional monarchy. The monarch is represented by a Governor-General. And the head of state is Queen Elizabeth II, and officially she is "Queen of Jamaica".

The climate type of Jamaica is tropical, with hot and humid characteristics. In terms of area, Jamaica is the third largest island in the Caribbean Sea. The island houses the Blue Mountains. Some of the important cities and towns are the capital city Kingston, Portmore, Spanish Town, Ocho Rios, Mandeville, Port Antonio, Montego Bay, and Negril. Not only this, Jamaica also houses Kingston Harbor, which is the seventh largest natural harbor in the world. Moreover, for the Jamaica tourism, there are several points of attractions for the tourists distributed across the country. For instance, Dunn's River Falls in St. Ann, YS Falls in St. Elizabeth, the Blue Lagoon in Portland etc.

What is the capital of Jamaica?

Kingston is the capital city of Jamaica, located on the southeastern coast of the island.

Places to Visit in Jamaica