Greenland is the world's largest island and an autonomous Danish dependent territory, located between the Arctic and Atlantic oceans, east of the Canadian Arctic Archipelago in North America. It is between latitudes 59° and 83°N, and longitudes 11° and 74°W. 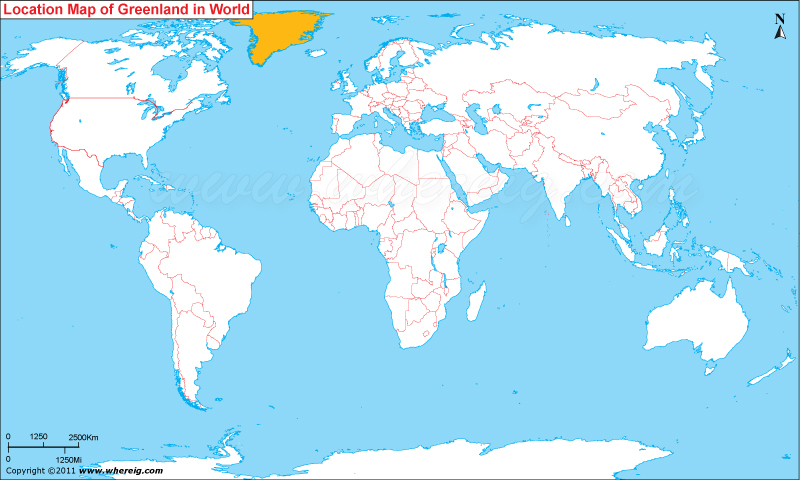 About Map: The location map of Greenland shows the accurate geographical position of Greenland.

Where is Greenland Located?

Greenland is located east of the Canadian Arctic Archipelago of North America continent.

Physiographically, Greenland is part of North America continent but it is an autonomous territory of Kingdom of Denmark, a European country. The water bodies lying around the region are Arctic Ocean in the north, Greenland Sea in the east, Denmark Strait in the south-east (it separates Greenland from Iceland), and in the south Labrador Sea lies. However, in the western side Davis Strait and Baffin Bay separate Greenland from Canada.

The region also famous with the name Kalaallit Nunaat, it means "Land of the Greenlanders." Politically, the region is an autonomous country within the sovereignty of Denmark. Greenland came under Danish sovereignty in the year 1814, before it, Greenland was under the rule of Denmark-Norway for centuries. With the Constitution of Denmark in the year 1953, Greenland lastly became a part of Denmark. And the treaty that has taken place between them is known as Rigsfællesskabet (Commonwealth of the Realm) in Danish.

However, in the year 1979 Denmark approved home rule to Greenland. Furthermore, in 2008, Greenland voted to have more powers to the local government. Hence, now Denmark regulates only foreign affairs, security, and financial policy. Besides, it also provides a subsidy of DKK 3.4 billion annually.

Moreover, the Greenland map shows that it lies partly in the temperate and partly in the arctic region hence the climate is tundra and continental type with extreme cold and short summer. Since temperature remains very low most the months hence, only southern part of the Greenland has human habitation and northern region is almost uninhabited. The local people largely depend upon the hunting and gathering. But nowadays, due to Greenland tourism and scientific research the economy and other infrastructure have been developed.